We Will Keep The Filibuster Says Sen. Jeff Flake 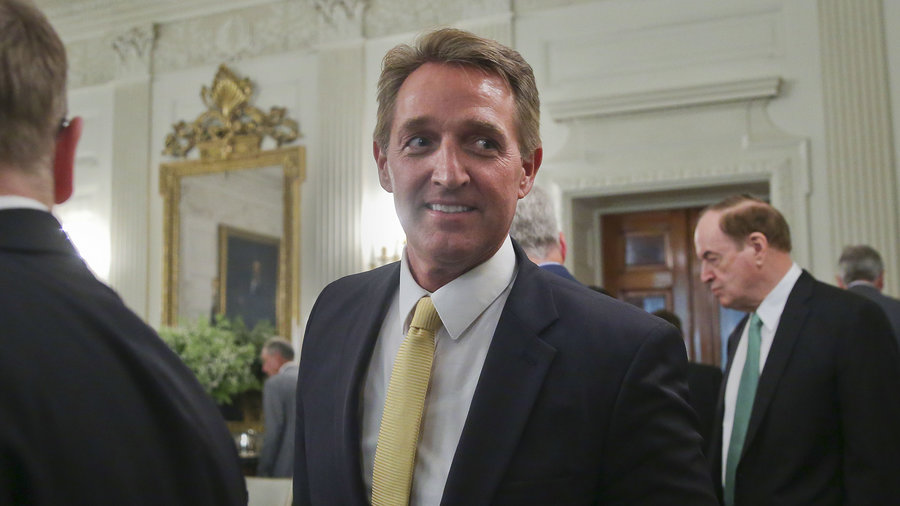 President Trump wanted the filibuster to be abolished. The call was rejected by Senator Jeff Flake. This is what the removal of the filibuster would mean. Trump would be able to have more bills passed. The issues he now face with the Senate and House would lessen.

What Exactly Is The Filibuster ?

The filibuster is a 60 vote threshold which is necessary for legislation to be passed. Therefore if a particular bill requires the filibuster, 60 votes must be in favor.

The filibuster doesn’t apply to every bill, but for some that are considered important. This is the main reason Trump wants it gone.

Flake who was a guest on CBS Morning was asked about the filibuster being abolished. He said that it would be a mistake to get rid of it.

Flake has recently written a book called, Conscience of a Conservative: A Rejection of Destructive Politics and a Return to Principle.

He also said “I don’t want to lurch back and forth every couple of years from one extreme to the other.”

“Those rules are there for a reason. They’re good. … They invite us to work across the aisle,” he commented.

This wasn’t the first time Trump asked for the filibuster to be removed. He asked recently because Obamacare repeal wasn’t passed in Congress.

The Senator can’t bring himself to agree with Trump’s methods. Bipartisan efforts by Trump seem nonexistent. Trump success came into view briefly when the Senator made this comment.

Flake said “that’s not going to happen if you refer to the other party as my enemies or losers or clowns.” Flake is up for re-election soon and the question was asked if he believes the President will back him? He said that would be up to Trump.

Senator Flake believes that “The president’s “protectionist attitude” toward free trade and isolationism, are “not conservative.” He agreed with his choice for Supreme Court Justice and policy on tax. He doesn’t think Trump is conservative in other areas.

Flake also said the Republican Party needs help; that it is no longer what it should be. He thinks the party has lost its direction. These comments were made on Face The Nation, a television show. The Moderator is John Dickerson, who speaks to many Political leaders on important subjects.

Flake joins a list of Republican Senators who disapprove of Trump’s tactics. Some have even made it clear that he should be very careful.

In more recent times, McCain has withstood Trump, especially when it comes to the health care bill. Another person who has been outspoken is Sen.Graham. He warned Trump not to fire Sessions the current AG. He said if Trump did such a thing, there would be grave repercussions.

All of this is bad news for Trump, who needs the support of the Party and anyone who has the Country at heart. The problem is Trump’s attitude and approach. America is not like any of his businesses. That method has created many opponents for Trump.

previousNo White House Problems Trumps Insists All Is Well
nextDid Anthony Scaramucci Resign Or Was He Fired?
We use cookies on our website to give you the most relevant experience by remembering your preferences and repeat visits. By clicking “Accept” or continued use of site, you consent to the use of all cookies. Privacy Policy
Do not sell my personal information.
Cookie SettingsAccept and Close
Manage consent