March 05, 2021
Home News Could Trump’s Taunting Of Kim In His Backyard Start A War? 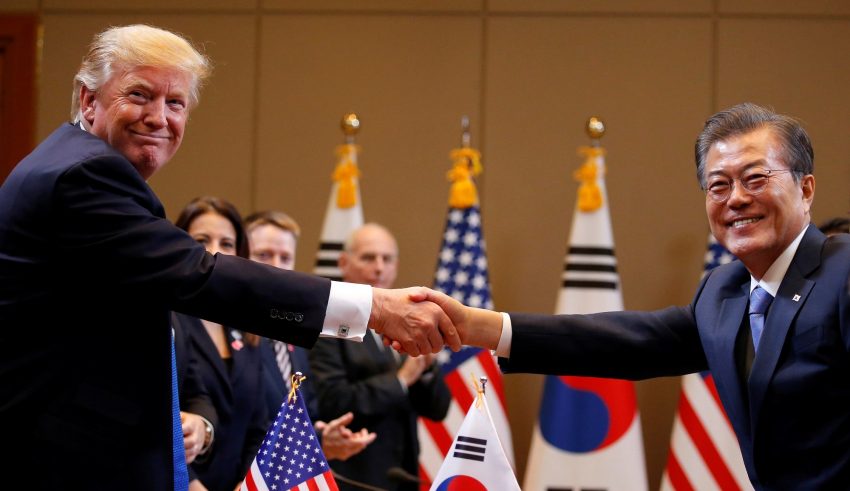 He also continued to threaten Kim Jong-un despite being so close in the vicinity. Trump also told him to make a deal. He wanted Kim to negotiate by ending his nuclear program.

In recent weeks North Korea had quieted a bit. They haven’t launched any missiles recently. Yet there is still a great concern about their refusal to stop their nuclear activities.

Since starting his tour more warships have entered the Korean Peninsula.

Trump cited progress with North Korea but didn’t go into any details.

Trump said things are looking more favorable but still asked for more spending. So what exactly does he need $4 billion to do?

Trump wrote a letter to Congress asking for the rise in spending. He wrote “this request supports additional efforts to detect, defeat, and defend against any North Korean use of ballistic missiles against the United States, its deployed forces, allies, or partners.”

John McCain and Mac Thornberry said they would consider Trump’s request. They said “this request also underscores the threat posed by the rogue North Korean regime and the urgent need to boost our missile defense capabilities to meet it.”

This could be a welcoming change for the President who has found the going tough with McCain. Trump and McCain were recently at odds over health care.

South Korea’s President Moon Jae-in me with Trump after he arrived in South Korea. He said “I know that you have put this issue at the top of your security agenda.”

Moon said “so I hope that your visit to Korea and to the Asia Pacific region will serve as an opportunity to relieve some of the anxiety that the Korean people have due to North Korea’s provocations and also serve as a turning point in resolving the North Korean nuclear issue.”

Trump had said the US had three aircraft carrier groups and a nuclear submarine close by. He talked about an “exciting day tomorrow for many reasons that people will find out.”

He didn’t say much about that and it was left to speculation. Trump seemed to have toned down his approach on North Korea.

Despite this tensions are high, especially with the presence of such a Military presence. Yet the use of a high presence can be expected when the President travels.