Trumps Sunday Morning Tweet Frenzy Against Some Of His Foes 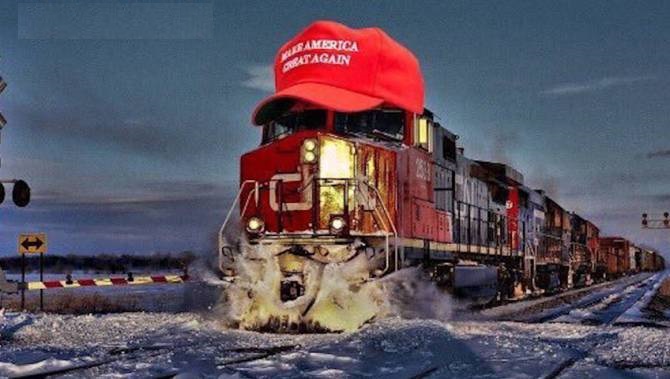 President Trump recently went on a rampage using twitter. He was relentless as he made mockery of Kim Jong-un and Hillary Clinton.

Trump called the North Korean leader a “rocket man”. He also retweeted a funny video of Hillary Clinton takes a hit in the back. Trump hits a golf shot and the ball strikes her.

Trump also tweeted about hurricane donations he made. He also corrected the spelling of someone he endorsed.

Trump also tweeted about the London terrorist attack. He called those he considered responsible loser. After the attack he called for stricter measures against Muslim-majority Countries.

Trump tweeted about his worth to twitter. His retweet was about a story headline. One analyst estimate Trump to be worth $2 billion to twitter.

Most of the twitter tirade was retweets. He did one on Trump train. It shows a train with Trump taking all the States in 2020 elections.

The train was decorated Make America Great Again at the top, with the color red.

The President certainly had a field day with his tweets.

The constant tweeting of the President has boosted twitter significantly.

There are lots of other social media platforms, but twitter is the choice of the President. He has made it a practice to use the platform for venting.

He has also used it to promote his aims. His reach goes very far and he has lots of followers.

Those who disagree with his agendas, even use twitter themselves to vent.

The use of twitter by many in politics has grown. It has now become a norm to tweet about issues of the people. Issues of the State are also on increase.

Trump often retweets many of the things he said before. That seemingly works to strengthen and reemphasize a point.

Here are some the tweets.

These two definitely take the cake. It shows Trump disregard for Clinton in any way. It also shows Trump’s belief to winning the next election.

previousFacebook Ads Sold To Russian Company On Mueller’s Mind
nextWill The US Show Of Force Deter North Korea?
We use cookies on our website to give you the most relevant experience by remembering your preferences and repeat visits. By clicking “Accept” or continued use of site, you consent to the use of all cookies. Privacy Policy
Do not sell my personal information.
Cookie SettingsAccept and Close
Manage consent