Trump’s Speech At The UN Leaves Many Speechless 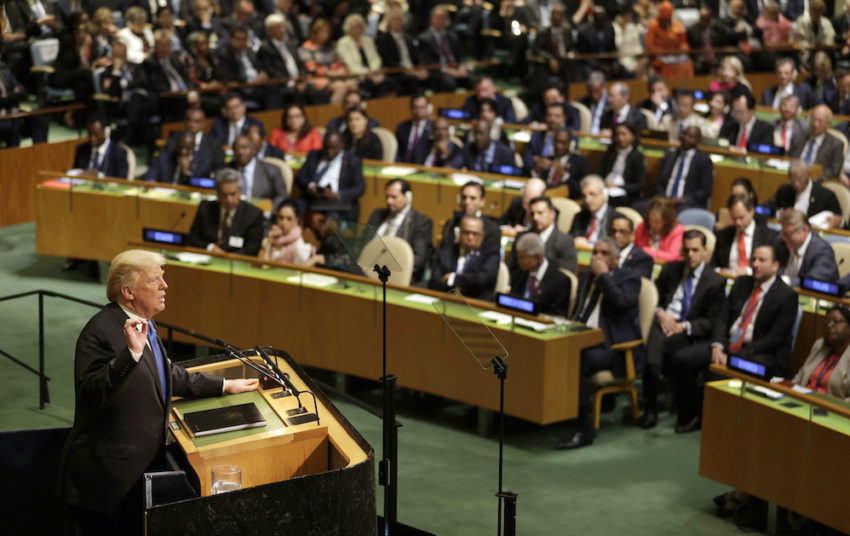 The President went to the UN headquarters. He gave a speech that left many diplomats taken back. Trump continued with his “Rocket Man” name calling of Kim Jong-un.

He said that “Rocket man is on a suicide mission.”

Trump said “the United States has great strength and patience. But if it is forced to defend itself or its allies, we will have no choice but to totally destroy North Korea.”

Trump and his allies have failed to get North Korea to quit its missile program. Many Nations want a peaceful resolution, but none seem forthcoming.

What is even more concerning is the lack of options. It seems that a test of force is the only solution to the problem.

No one wants war, so leaders are trying to find another solution. That fear of war seems even more inevitable with Trump’s speech.

Some of the Diplomats at the UN didn’t show any support for Trump. But his aides at the White House stood behind their President.

US Ambassador to the UN Nikki Haley spoke to ABC. She said “what you saw yesterday from the President was he being honest.”

The whole situation is horrific. If America acts it could be seen as a bully. The US themselves have been testing similar weapons.

If the US does nothing and Kim strikes then others may blame them for doing nothing.

Some of the tests have come very close to Countries in the Korean Peninsula. It only takes a mistake or a bad launch to cause a catastrophe.

Worst yet, Kim decides he will test one of his missiles on another Country.

Some people wonder what his speech will do for Foreign Policy. Carla Anne Robbins believes all this will do is create more hostility.

Robbins said “really the impact of all of this was to crank Pyongyang up and not offer a huge amount of assurance to the allies and certainly no way forward.”

Could Trump really be trying to get North Korea to do something stupid? Is he hoping for an opportunity to strike?

What was the purpose of lashing out at Kim? It seems like the same strategy, just a bigger audience.

None of which have caused Kim to really be concerned.

The major concern that should be on the minds of all is how possible is war?

Both Trump and Kim seem willing to do the worst.

previousNancy Pelosi’s Dreamers Turn On Her In Anger
nextCould We Soon See Kelly Exiting The White House
We use cookies on our website to give you the most relevant experience by remembering your preferences and repeat visits. By clicking “Accept” or continued use of site, you consent to the use of all cookies. Privacy Policy
Do not sell my personal information.
Cookie SettingsAccept and Close
Manage consent