Nancy Pelosi’s Dreamers Turn On Her In Anger 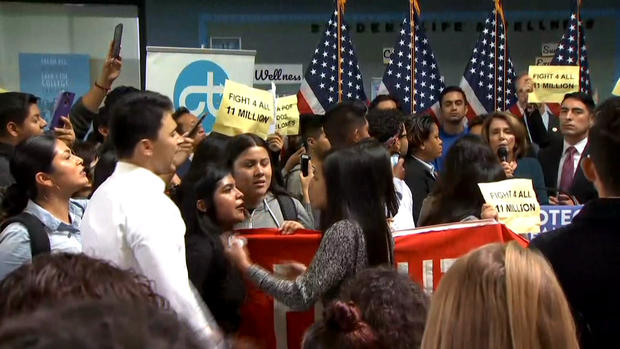 There is a saying, “never bite the hands that feed you”. This could easily be the case for some who will lose out because of DACA cancellation.

Pelosi was forced to tell a group of students to “stop it, just stop it now.” She was meeting with a group of illegal immigrants. There were angry that she was working with the President.

It is laughable that the very persons she is trying to help have turned on her. It is unwise to go against anyone or anything that is working with you in mind.

Apparently the feelings immigrants are having towards the President are running high. The students haven’t considered that Pelosi might be on to something.

Pelosi and others held a news conference demanding Trump pass the Dream Act. Obviously the one person who can reverse the ruling is Trump.

The Dreamers obviously are lost to this fact. Pelosi spoke kind words that were greeted with harsh behavior.

She said “Our nation’s dreamers are an inspiration to all of us.” She continued “with their courage and their patriotism. They embody the promise of America… Of the American Dream… Make American dream again.”

Her statements were greeted with let us speak. They told Pelosi “No lip service”.

Hopefully the Dreamers take it easy with their behavior. Attacking the very people who are trying to help won’t aid them.

If Pelosi and her allies stepped back from helping them what would happen?

The crowd of about 40 students started chanting.

Up to this time, the protesting hasn’t worked. The term “silence is golden “could prove significant.

Letting Pelosi work with Trump might be the only alternative. Steps have been made through the Courts to help.

Unfortunately taking the way of the Court system might fail. The travel ban is proof of that.

Obama was the one who created the bill to help the immigrants. It is surprising to see the Dreamers blame Democrats.

Some of those present had signs that read “Democrats are deporters”. Whenever Pelosi tried to speak they interrupted.

They chanted yes or no. Pelosi replied to what? They also asked that ICE be shut down.

They shouted “we don’t owe you nothing. This is what democracy looks like.”

Let’s hope Democrats continue to work for the Dreamers. If Democrats are “deporters” as the illegal immigrants claim, then they are doomed.

previousWill The US Show Of Force Deter North Korea?
nextTrump’s Speech At The UN Leaves Many Speechless
We use cookies on our website to give you the most relevant experience by remembering your preferences and repeat visits. By clicking “Accept” or continued use of site, you consent to the use of all cookies. Privacy Policy
Do not sell my personal information.
Cookie SettingsAccept and Close
Manage consent