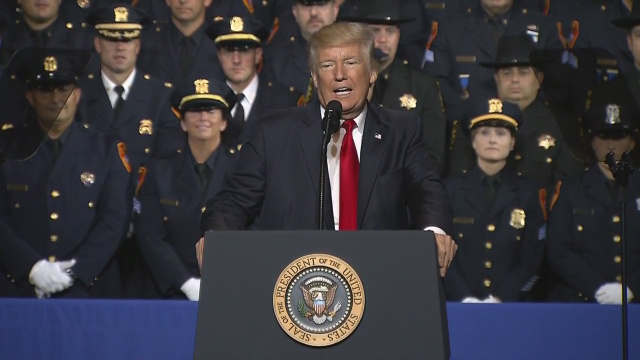 Trump recently spoke to Law Enforcement Officers in Suffolk County, New York. The discussion was about the treatment of suspects and the eradication of MS-13. The MS-13  gang  has been terrorizing some parts of America for years. They are considered to be one of the worst gangs in America right now.

The gang violence in the Country is a big concern for Trump. It is also a major problem for the Police, who are having a hard time. Their biggest issue is Trump’s Policy on immigration.

His speech encouraged the Law Enforcement Officers to be more aggressive. Trump told the officers to stop being nice. He said there were too much violence and a need to crack down on illegal immigrants.

“I said, ‘You could take the hand away, OK,” Trump remarked. This statement caused some in attendance to applaud him. Both Federal and law enforcement officers from New York / New Jersey area were in attendance.

Trump also said to stop shielding suspects head when placing them in a vehicle.

After the meeting was over, the Suffolk County Police Department gave a statement. The statement said “Violations of those rules and procedures are treated extremely seriously. As a department, we do not and will not tolerate roughing up of prisoners.”

A former Chief of Police for Suffolk County was sentenced to 4 years for Police Brutality. James Burke was charged after he beat a suspect in an interrogation room while he was handcuffed.

The gang MS-13 or Mara Salvatrucha is believed to originate in Los Angeles. The leaders  of the gang were deported which may have caused strengthening in Central America. The establishment of the gang is believed to have started in the 1980s.

The gang is well known for machete killings and torture. They are estimations of thousands of gang members in the US and Central America.

Congress has been encouraged by Trump to find the money needed for the hiring of 10,000 Customs and Immigration Officers. Trump reason for such a high demand of officers is to eliminate MS-13.

While Trump was in New York  his AG was in El Salvador. Sessions has gone to that Country in an attempt to help with the MS-13 problem. Trump and Sessions are not on the best of terms. Trump did not mention his AG’s attempt to help resolve the issue.

An estimated 3,311 gang members have been caught during the year of 2017. There has been a Nationwide crackdown on gang activity.

Trump signed an executive order about eradicating this gang. The AG has told Federal agents and Law Enforcement Officers to make prosecuting gang members a priority.

The eradication process isn’t as effective because of Trumps anti immigration law. Many who might have some sort of information to help are scared to do so. Reason being many who know anything are themselves illegal in the Country.

previousIs Pence Ready For Inauguration If Trump Is Impeached?
nextTravel Ban Stipulation Allows More Family Members To Enter The US
We use cookies on our website to give you the most relevant experience by remembering your preferences and repeat visits. By clicking “Accept” or continued use of site, you consent to the use of all cookies. Privacy Policy
Do not sell my personal information.
Cookie SettingsAccept and Close
Manage consent