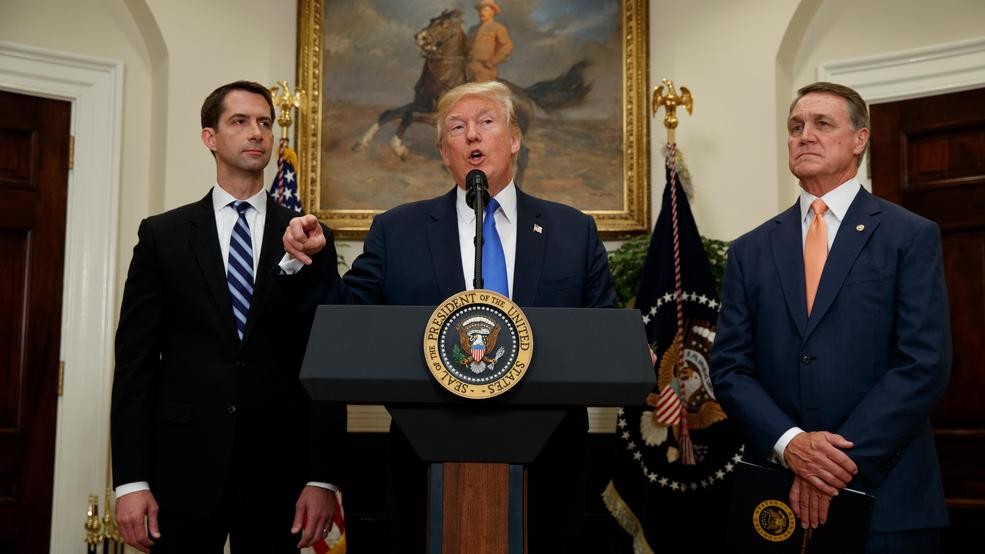 Trump has made it clear since his election run about the issue of immigration. He has recently introduced a bill that will cut the amount of people who can legally live in the US by half.

Before the green card allowed over 1 million people, but Trump’s new bill will reduce it.

Trump made the announcement at The White House with David Perdue and Senator Tom Cotton at his side. He talked about the new legislation and the impact it would have.

Trump said “This would be the most significant reform to the immigration system in half a century.” He told those at the meeting “it is a historic and very vital proposal.”

Many people have migrating to the US to live and work. They have through the laws of the land migrated to live with relatives. But this new reformed bill would change that.

The bill was first produced in April by the Senate. What you have before you now is a modified version of that legislation. That new version is what has been endorsed by Trump.

“This is just a fundamental restructuring of our immigration system which has huge implications for the future,” said Kevin Appleby.

He also said “This is part of a broader strategy by this administration. To rid the country of low-skilled immigrants they don’t favor in favor of immigrants in their image.”

Kevin Appleby is the senior Director of International migration policy for the Center for Migration Studies.

Some have criticized the move by the Trump Administration. They said that this will hinder employers hiring the workers needed for any position they need filled.

The RAISE ACT maintains the amount of green cards that can be given in a year.  They also lamented that Australia and Canada allow more than double what the US permit.

Stuart Anderson said “Just because you have a PhD doesn’t mean you’re necessarily more valuable to the U.S. economy.”

He said that “The best indication of whether a person is employable is if someone wants to hire them.” Stuart Anderson is the Executive Director of the National Foundation for American Policy.

Roy Beck, President of NumbersUSA applauded the move. He said that the RAISE ACT “will do more than any other action to fulfill President Trump’s promises as a candidate. To create an immigration system that puts the interests of American workers first.”

During his campaign Trump argued that the current immigration policy was causing Americans job opportunities. He also believes it leads to security risks at a National level. The policy as it stands has been around for 5o years.

The new policy aims to remove the 50,000 green cards awarded in the diversity lottery. It will cut the amount of refugees entering the US to 50,000.

Points will be awarded to those applying for green cards. The points will be based on skills, education and if the person has good English skills.

Some argued that immigrants boost the economy. When it comes to crimes, they have a lower rate than those born in the US.

previousThe US Does Missile Test As It Contemplates North Korean Threats
nextIs There Anyone Who Can Actually Remove Trump As President?
We use cookies on our website to give you the most relevant experience by remembering your preferences and repeat visits. By clicking “Accept” or continued use of site, you consent to the use of all cookies. Privacy Policy
Do not sell my personal information.
Cookie SettingsAccept and Close
Manage consent