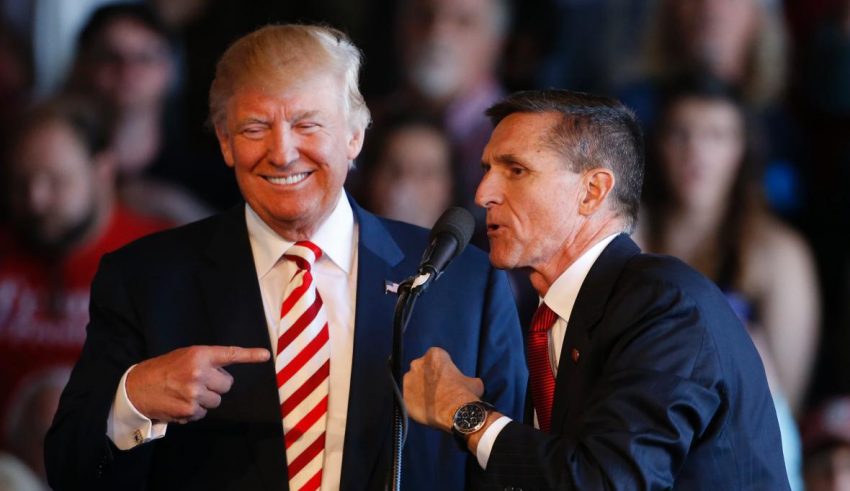 Recent communications with a reporter portrays Trump as being calm. He made it clear that he wasn’t angry at anyone.

He also made it clear that the charges against former aides won’t affect him.

Another one of his former aides was found to be following Russian troll accounts. Michael Flynn a former National Security Adviser retweeted messages from Russian accounts.

It is reported that he did this just days before the day of voting.

Then there is Paul Manafort and George Papadopoulos. Manafort will appear in court today. While Trump has been unsuccessful in making the public believe Papadopoulos is low level.

Reports indicate that Flynn followed five Russian trolling accounts on twitter. But why would he do such a thing?

It is believed it was an effort on his part to push Trump and discredit Clinton. It is also reported that Donald Trump Jr., Kellyanne Conway and Brad Parscale did the same.

All of these individuals worked the Trump campaign.

Flynn was already a part of Mueller’s investigation, so this new revelation only hurts him even more.

Manafort has pleaded not guilty but that outcome is yet to be determined. When he faces the accusations against him how will he defend those claims?

The documents against him looked very convincing. Will the charges force him to give up anything he has, if he has anything?

Then there are the claims by Papadopoulos. These claims hit a little closer home for the President.

Despite his denial of the position of Papadopoulos there is mounting evidence proving Trump a liar.

Papadopoulos wrote in a email “It would be a pleasure to meet again. If not, we should have a call and discuss some things.”

In April 2016 he made contact with a Russian female. She responded to Papadopoulos and was willing to meet up with him.

Also noting she was currently home in Russia.

Documentation also showed many other dates by Papadopoulos. Reports show dates from April to October 2016.

Even now as Trump seemingly puts on a brave face these charges hit close to home. Many Democrats are pushing for impeachment.

This idea is already in momentum with one billionaire. But even as Trump refuses to back down it must be worrying.

Could of these persons be doing these things under his nose? Without him having any knowledge of it?

That may be the biggest question.