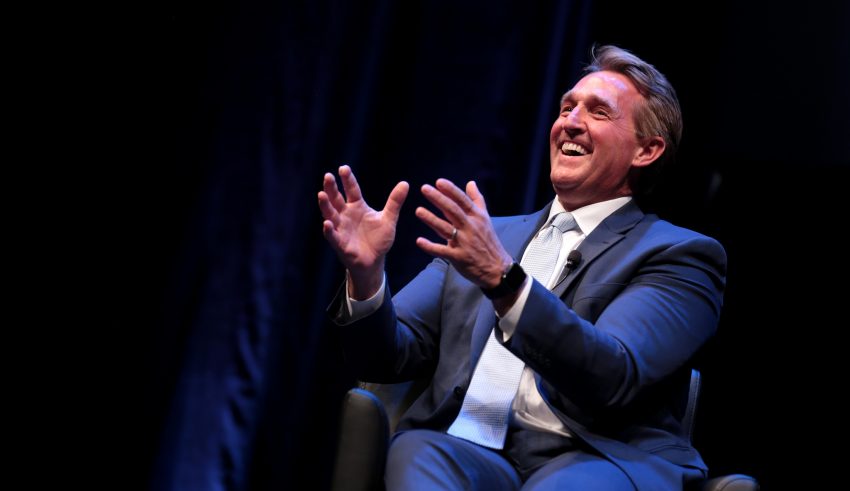 Senator Jeff Flake was set against President Trump and his agenda. He made it clear that he didn’t agree with many of the decisions that Trump was making.

He however wasn’t getting the support he needed from colleagues. It seemed that in his effort to counter Trump he stood alone.

He may however find a help in the Democrats if he so sought it. Most Democrats were at odds with Trump and what he was doing. If Democrats could benefit from his help it wouldn’t be surprising that they would accept as well.

They were quite a few persons who were at odds with what the President was doing and would surely seek to be a voice against his ideals.

One of the more if not most outspoken Democrats against Trump was Sen. Maxine Walters.

She at one point had a war of words with the President who would constantly insult or criticize her and she the same.

She recently made reference to what happened to Sarah Sanders, who was the White House Press Secretary.

Sanders was asked to leave a restaurant in Virginia where no one would serve her.

Talking about Sanders she said that others should emulate the restaurant and resist Trump’s Administration.

“If you see anybody from that Cabinet in a restaurant, in a department store, at a gasoline station, you get out and you create a crowd. And you push back on them. And you tell them they’re not welcome anymore, anywhere. We’ve got to get the children connected to their parents,” Waters said.

Flake said he was determined to resist the tariff situation Trump supports and seek to bring about a reversal to those implementations.

“I do think that unless we can actually do something other than just approving the president’s executive calendar, his nominees, judges, that we have no reason to be there,” Flake said. “So I think myself and a number of Senators, at least a few of us, will stand up and say let’s not move any more Judges until we get a vote, for example, on tariffs.”

However many prominent Senators weren’t onboard with Flakes idea.

“My preference would be that the trade issues be handled in the Finance Committee. I’ve been meeting with my staff, and we’re trying to come up with a consensus approach,” John Cornyn said. “I think rather than offering those amendments on the floor on unrelated legislation, it’s better to have the Finance Committee, which has primary jurisdiction, take that up.”

Another Senator made it clear he was not in support of Flake’s decision to counter Trump.

“I am not holding up judicial nominees for that purpose,” Sen. Patrick Toomey said. “It is very important to me that we get a vote, and I think we’re going to get a vote.”

With such a strong lack of support maybe Flake may find the going better with Democrats, but without the support of his colleagues it was unlikely.