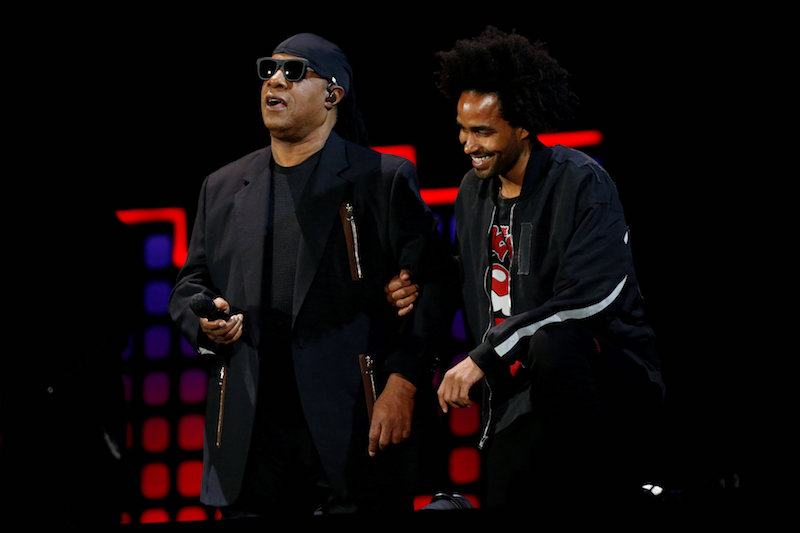 Stevie Wonder once again shows his frustration with the President. Wonder is a very talented musician and singer.

Stevie Wonder shared the spotlight with Beyonce a few weeks earlier at a fundraiser. He spoke out against racism and climate change.

Now he stands by the NFL and all of those who fight against racism. He made reference to the flag amidst the numerous incidents involving African Americans.

He believes Trump is helping to push racism and says he cannot show patriotism because of this.

Trump is currently in a controversial issue with some from the NFL and NBA.

Wonder spoke before his performance began. He made reference to those who kneeled while the National Anthem played.

He said “tonight, I’m taking a knee for America; but not just one knee, I’m taking both knees.”

Wonder continued “both knees in prayer for our planet, our future, our leaders of the world and our globe. Amen.”

He asked those in the audience to denounce bigotry and racism.

His son Kwame Morris shared the stage with him at that point.

There is a high level of frustration. The President has taken a strong stance against a lack of patriotism.

Many celebrities and sport stars have refused to acknowledge this. They believe that there is no sense in doing so if they are not seen as equal.

The recent rallies and violence, especially at Charlottesville has escalated racial issues. There has been immigration problems and many African Americans losing their lives.

The very persons who are called to serve and protect have occasionally taken life.

This is what has many at odds with the President. They believe he is doing nothing to help the situation. Some actually think he has made it worst.

Bruce Maxwell of Oakland A’s recently followed Kaepernick. He became the first person in the MLB to take this position.

The kneeing is in response to the brutality African Americans face by law enforcement.

The President knows this, but instead of facing the problem head on chose another course.

He said if persons left the stadium when anyone kneels during the anthem, it would stop.

Trump even encouraged NFL owners to fire those who knelt down.

Stevie Wonder joins a list of persons who are displeased with Trump. At present none of this has affected Trump in any way.

It is unlikely that any of it ever will.

previousTrump And Sports World At Odds Over Comments He Made
nextPolitics And Protests Creating Chaos For NFL Teams And It’s Fans
We use cookies on our website to give you the most relevant experience by remembering your preferences and repeat visits. By clicking “Accept” or continued use of site, you consent to the use of all cookies. Privacy Policy
Do not sell my personal information.
Cookie SettingsAccept and Close
Manage consent