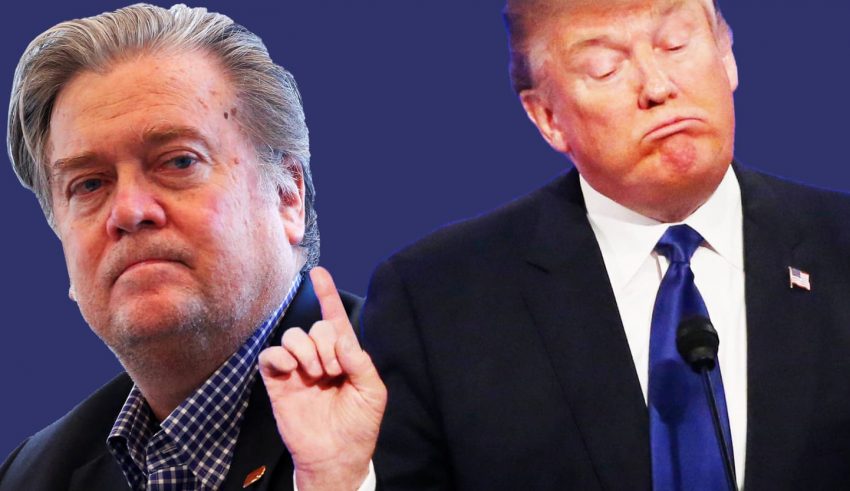 There was a time when President Trump and Steve Bannon were close allies. Their relationship was a strong one during the election campaign.

He had made a promise to fight those opposed to Trump’s agenda. Bannon even dabbled in election races as he supported various candidates.

It appeared that Roy Moore’s loss to Doug Jones also affected their relationship. Bannon had placed his support behind Moore. Trump wanted Moore to win but he didn’t.

Now this new book by Bannon was too much, it may be the final nail in the coffin of their relationship.

The book caused quite a stir. It was definitely not appreciated by the White House. A statement was issued and it wasn’t good for Bannon.

“Steve Bannon has nothing to do with me or my Presidency,” the statement said. “When he was fired, he not only lost his job, he lost his mind.”

Trump also had his lawyer send a letter to Bannon to cease and desist.

Despite all that had transpired Bannon said he still supported Trump. During a radio call he told a caller “the President of the United States is a great man. You know I support him day in and day out.”

Bannon had also claimed that a meeting between Donald Trump Jr. and Russia was treasonous.

The White House responded to his statement. Sarah Huckabee Sanders did a briefing condemning such comments.

She said “that is a ridiculous accusation and one that I’m pretty sure we’ve addressed many times from here before…. I’d refer you back to the comments he made previously on ’60 Minutes’ where he called the collusion with Russia about this President a total farce.”

“Going after the President’s son and in an absolutely outrageous and unprecedented way is probably not the best way to curry favor with anybody,” she added.

Sam Nunberg said “the only candidate who could have won this past election on the message of populism and conservative nationalism is Donald J. Trump.”

“However, at the time Steve took a formal role, the campaign was in dire straits, and I don’t believe the President would have been able to pull off that upset at the end without Steve Bannon,” he added.