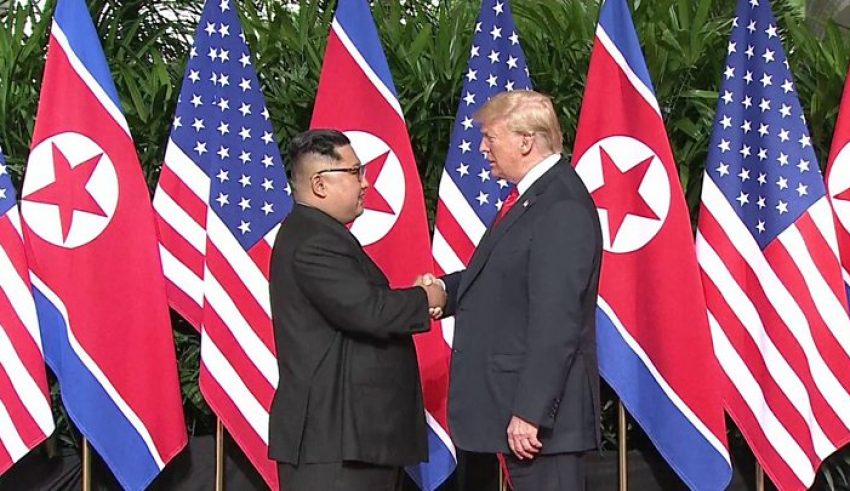 The World may have waited with bated breath for the summit between the U.S. and North Korea but it had finally happened.

The two men discussed many key topics and now the world looked on to see what this meeting would produce.

It appeared as though the two were having a very good talk and based on Trump’s remarks he was expecting good things.

President Trump and Kim Jong-un signed an agreement that could change the outlook of the Korean Peninsula and bring better relations.

Trump was certainly pulling out all the stops as he flattered the North Korean leader.

Trump’s approach was noteworthy as he met Kim, shook his hand and patted his back. The then walked the red carpet into the entrance of the Capella hotel.

“We will have a terrific relationship, I have no doubt,” Trump said.

This was a drastic change from moths before when the two leaders criticized each other.

Kim said, “old prejudices and practices work as obstacles in our way forward, but we overcame all of them and we are here today.”

Hours before the meeting Trump tweeted about what he was able to accomplish.

“We have our hostages, testing research and all missle launches have stopped,” Trump tweeted. “These pundits, who have called me wrong from the beginning, have nothing else they can say! We will be fine!”

“We are very proud of what took place today,” Trump said. “I think our whole relationship with North Korea and the Korean Peninsula is going to be a very much different situation than it has in the past. We both want to do something, we both are going to do something. We have developed a very special bond.”

He added, “We are going to take care of a very big and a very dangerous problem for the world.”

Kim also gave comments after the meeting through an interpreter.

“Today we had a historic meeting and decided to leave the past behind,” Kim said. “The whole world will see a great change.”

“It’s going great. We had a really fantastic meeting, lot of progress,” Trump told reporters. “Really very positive. I think better than anybody could have expected, top of the line. Really good.”

The two men took a long walk throughout the resort as thy continued to converse with each other.

The document signed by both men about their agreement was made public.