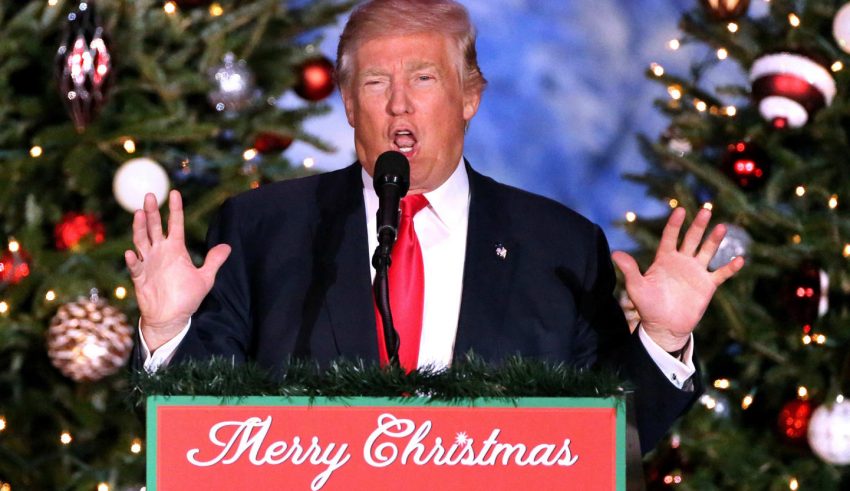 The President of the United States of America gave his Christmas speech recently. He patted himself on the back claiming that he was bringing Christmas back.

He spoke to a large gathering at an event sponsored by the Family Research Council. Trump said there was an assault on Christmas and since he took office, the day was considered merry once again.

He also spoke to American troops telling them they were winning the war. Trump offered them gratitude and praised their efforts, especially the Coast Guard.

He thought they did a great job dealing with the many natural disasters that affected the Country during the year.

“Many Republicans are very happy, but I have to tell you, the people of Florida, Texas, Puerto Rico, and lots of other States are even more happy,” Trump said. “What a job you’ve done. The Coast Guard saved thousands and thousands of lives. Almost — it’s unbelievable when I looked at the charts and I saw the number of lives you’ve saved. So I want to congratulate the Coast Guard for having done an incredible job.”

Trump also talked about his role in making Christmas a merry time. He said “people are proud to be saying Merry Christmas again. I am proud to have led the charge against the assault of our cherished and beautiful phrase. MERRY CHRISTMAS!!!!!,” Trump tweeted.

In October Trump had said he would make this time of the year merry again as well. So this was nothing new.

He said “we’re getting near that beautiful Christmas season that people don’t talk about anymore. They don’t use the word Christmas because it’s not politically correct.”

“You go to department stores and they’ll say ‘Happy New Year,’ or they’ll say other things and it’ll be red, they’ll have it painted. But they don’t say – well guess what? We’re saying merry Christmas again,” he added.

Many believed this was all part of the evangelical’s agenda. Trump had promised evangelicals he would give them a voice if they voted for him. It certainly looked as if that promise was being kept.