November 30, 2020
Home News Many Come Out For “March For Our Lives” Rally As It Draws Support And Ridicule 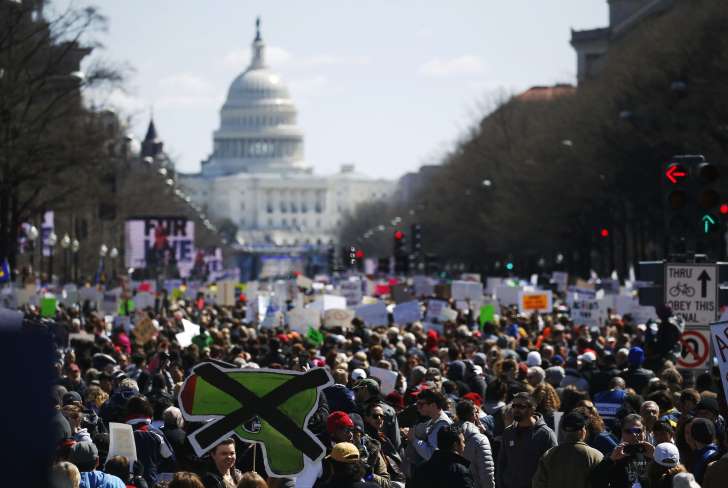 America had faced many mass shootings throughout the years. These incidents took the lives of many innocent people and left a void in the hearts of their loved ones.

Now a vast majority of the citizens decided they had enough of this predicament. The shootings at various schools were the main driving force behind the movement to see change in gun laws.

Lawmakers however didn’t budge despite efforts by parents and students who were given an audience with President Trump.

Trump had promised to find a reasonable solution to the matter but in the end gave way to the N.R.A.

Now the students and supporters decided to take matters into their hands. They have held many protests since the Florida school shooting.

The latest drive was the March For Our Lives movement. The marches were a nationwide event with all carrying the same message. They wanted to see changes made to gun laws to keep everyone safe.

Support for the march was strong as many Democrats threw their support behind by tweeting.

“Last week was monumental as thousands of students across the country walked out for gun safety. We heard them loud and clear in Washington and we know even more are gathering to #MarchForOurLives today. Did you hear them? Will you join them?,” Chuck Schumer asked on Twitter.

“Michelle and I are so inspired by all the young people who made today’s marches happen. Keep at it. You’re leading us forward. Nothing can stand in the way of millions of voices calling for change,” he tweeted.

The support seemed overwhelming despite the fact that others were not onboard.

“Congress has a duty to end the daily tragedy of gun violence in America. We must act. #NeverAgain #EndGunViolence,” Nancy Pelosi tweeted.

The White House also showed some sort of support.

The N.R.A. was against the march and bashed those who wanted to see more gun control.

“To all the kids from Parkland getting ready to use your First Amendment to attack everyone else’s Second Amendment at your march on Saturday, I wish a hero like Blaine Gaskill had been at Marjory Douglas High School last month because your classmates would still be alive and no one would know your names, because the media would have completely and utterly ignored your story, the way they ignored his,” Colion Noir said.

While the N.R.A bashed those who wanted to feel safer at school or other areas of the Country, some took a softer tone of disagreement.

“While I do not agree with all of the solutions they propose, I respect their views and recognize that many Americans support certain gun bans. However, many other Americans do not support a gun ban. They too want to prevent mass shootings, but view banning guns as an infringement on the Second Amendment rights of law abiding citizens that ultimately will not prevent these tragedies,” Marcio Rubio said.