Could This Knee Anthem Controversy Be NFL’s Downfall? 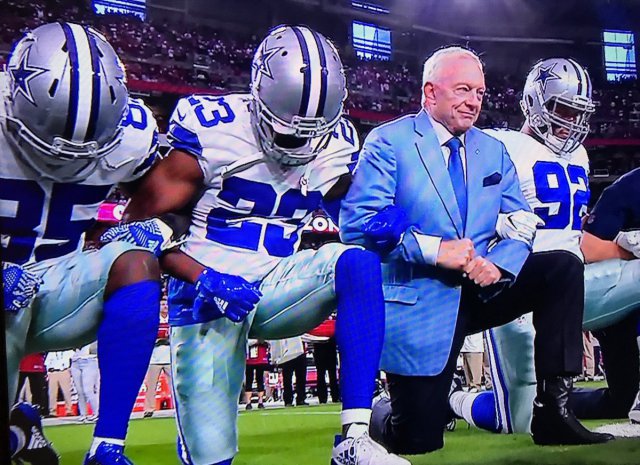 The controversy continues with many kneeling during the anthem. A protest that has gained more momentum after Trump made recent comments.

The protest has stretched far and wide. What started with one man desire for change has grown on a large scale.

The protest is no longer by one man but by many. It has affected player, owners and the fans.

It has affected other sports, which include the NBA, MLB and NASCAR.

The NFL suffers the most though, and that has become very evident.

Trump pushed the situation to a new high as he asked owners to fire players. He wanted those who refuse to acknowledge the anthem to be fired.

The NFL is the most popular sport in the US. It garners the most money of any of the sports. This is evident when the super bowl comes around.

The cost of advertising on that day is very costly.

Things could change though, as fans all over NFL country are getting frustrated. The protest has hit home. It has done so in a big way.

The situation has created a barrier, forcing many to choose a side. One will defend the President and what he did. The other will support the players and why they kneel.

Fans at the game which saw the Cowboys kneeling became angry. They booed as the owner of the team joined his players.

They were disgusted that he chose to join them in solidarity. The group locked arms and went on one knee.

Many believe that the stadium will see a drop in attendance. This is expected to happen with many of the venues where teams take a knee.

Could this whole protest cause the downfall of America’s most loved sport? Many may be quick to blame Kaepernick.

But will the President take any of the blame? The whole situation is starting to get out of hand. Someone said that the protest should be against the police not the anthem.

There seems to be a problem of not facing this issue head on. You have too many protests on one hand and a lack of responsibility on the other.

The protests seem to be getting nowhere and that is evident. No one wants to take responsibility for the problems facing the Country.

For far too long there has been a refusal to admit there are issues which need addressing.

The issue is a social one that requires everyone coming together in love. But this cannot take place if groups are created and inequality taught.

Now it has put the NFL in danger. Let us hope that other sports do not find themselves in the same boat.

It is time to sort this problem out and give the fans back their game.

previousNew Travel Ban Could Sparks More Emotions And Outrage
nextThe Truth About White House Disloyalty Has Been Confirmed
We use cookies on our website to give you the most relevant experience by remembering your preferences and repeat visits. By clicking “Accept” or continued use of site, you consent to the use of all cookies. Privacy Policy
Do not sell my personal information.
Cookie SettingsAccept and Close
Manage consent