March 07, 2021
Home News Intelligence Leaders Believe Russia Is A Threat Even As They Face Lawmakers 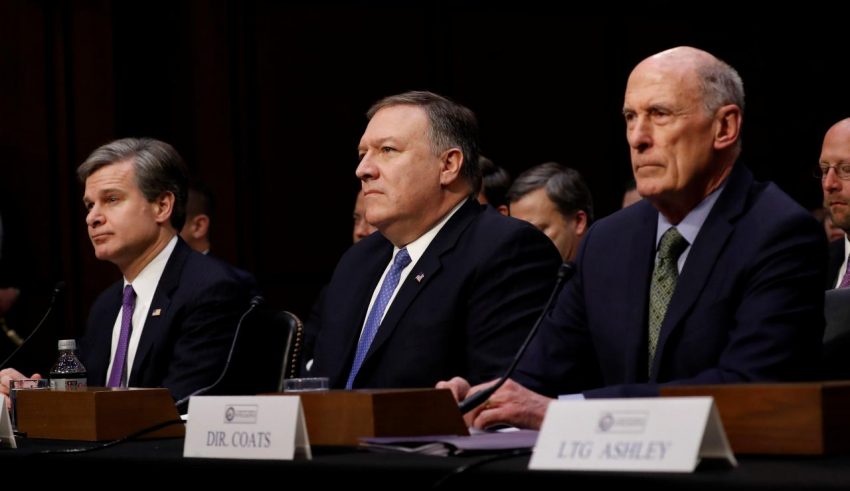 The Russian inquiry continued to pervade American politics. The leaders of the intelligence community believe that Russia was a threat to the U.S.

Special Counsel Robert Mueller continued his investigation with hope of interviewing Trump. This hadn’t taken place up to this point but both men wanted to talk.

The latest twist in the investigation saw intelligence leaders facing lawmakers over many issues considered worrying.

One such case was the handling of spousal abuse, a matter that relates to Rob Porter.  To receive top clearance for the White House an investigation was done into a person’s background.

The FBI received information that Porter was abusive to his ex-wives and that was passed on to the White House. The FBI Director defended his employees and said they followed protocol.

FBI and CIA officials testified in an interview with Lawmakers recently and defended their position on the carrying out of duty. Christopher Wray, Mike Pompeo and Dan Coats all testified.

“The FBI process involves a fairly elaborate set of standards, protocols,” Wray said. “I am quite confident that in this instance, the FBI followed established protocols.”

Wray also believed that Russia was meddling and still meddles in American affairs.

Director of National Intelligence Daniel Coats believed that Russia will try to interfere in the midterm elections.

Trump had been blamed for allowing this to happen by not doing anything about it when he was made aware.

Who Is To Blame?

“Make no mistake: This threat did not begin in 2016, and it certainly didn’t end with the election,” said Sen. Mark R. Warner. “What we are seeing is a continuous assault by Russia to target and undermine our democratic institutions, and they are going to keep coming at us.”

He squarely pointed fingers at the President and this could be a concern for Trump. Trump had on many occasions called the Russian investigation a witch hunt and said “no collusion.”

However failure to act could be considered a sign of collusion or weakness on his part.

“Despite all of this, the president inconceivably continues to deny the threat posed by Russia,” Warner continued. “He didn’t increase sanctions on Russia when he had a chance to do so. He hasn’t even tweeted a single concern. This threat demands a whole-of-government response, and that needs to start with leadership at the top.”

There was an assessment given on the matter and it was clear that there was need for concern.

“We assess that the Russian intelligence services will continue their efforts to disseminate false information via Russian state-controlled media and covert online personas about U.S. activities to encourage anti-U.S. political views.”

If this was true then more effort was certainly needed to combat such a threat.