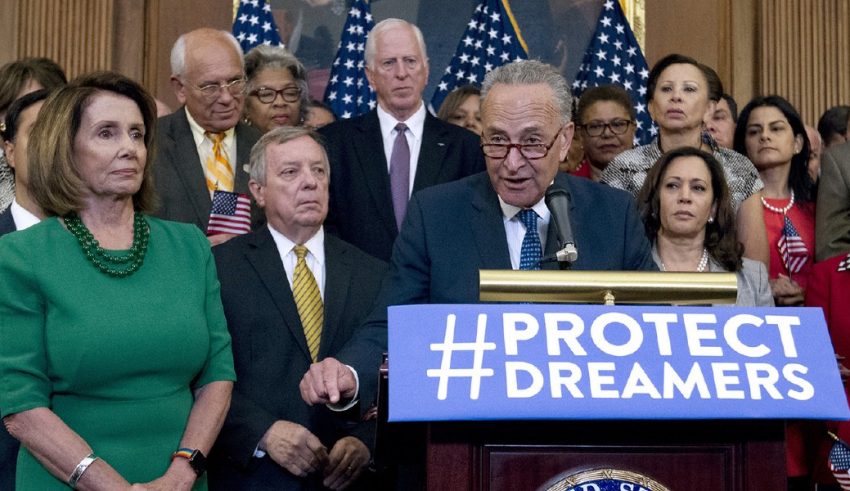 The American Government reopened after Charles Schumer agreed to Mitch McConnell’s terms. He promised him that he would work on immigration legislature if he voted to end the shutdown.

Schumer agreed and the Government now reopened but that would be on a temporary basis. The vote was only for three weeks worth of spending. If McConnell failed to keep his end of the bargain it could spell trouble for Republicans.

To make a deal like this and not keep it would certainly throw any future negotiations out the window. Schumer accepted McConnell’s word in good faith which left the Dreamers unhappy.

The Dreamers were disappointed that DACA wasn’t heading in the direction it should. However Schumer said he believed McConnell would keep his promise.

“If he does not honor our agreement, he will have breached the trust of not only the Democratic Senators but the members of his own party as well,” he said.

“This immigration debate will have a level playing field at the outset and an amendment process that is fair to all sides,” McConnell said.

It was believed that Schumer thought prolonging the shutdown won’t benefit anyone at this time and passed the decision on to Republicans to see what they would do.

Not everyone agreed with his decision. Many of those threatened by the ending of DACA were frustrated. They believed that Schumer should have continued his holdout till a deal was reached for DACA.

“Our members, including my brother Jonathan, are in greater danger today because of the cowardice of U.S. Senators,” activist Cristina Jimenez.

Dreamers plan to vote in their numbers against any Republican who wanted them gone.

Adrian Reyna said “we will be organizing voters, the people who will bring the consequences.”

Diego Corzo said “I will be living under a lot of stress, a lot of uncertainty and fear that everything that I worked so hard to accomplish can be gone.”

It was clear that those under threat of deportation didn’t trust the Government to be fair in their dealings.

“To anyone considering such a move, let me be clear: Promises won’t protect anyone from deportation,” said Greisa Martinez.

Some believed that Schumer caving could hinder the Democrats during election time. Stephanie Taylor, co-founder of the Progressive Change Campaign Committee believed so.

She said “today’s cave by Senate Democrats led by weak-kneed, right-of-center Democrats is why people don’t believe the Democratic Party stands for anything.”

“These weak Democrats hurt the party’s brand for everyone and make it harder to elect Democrats everywhere in 2018,” she added.

Fighting to save Dreamers wasn’t an easy task. Schumer and Democrats would have to hope that they get their DACA deal. Those they seek to defend certainly weren’t assured by their tactics.