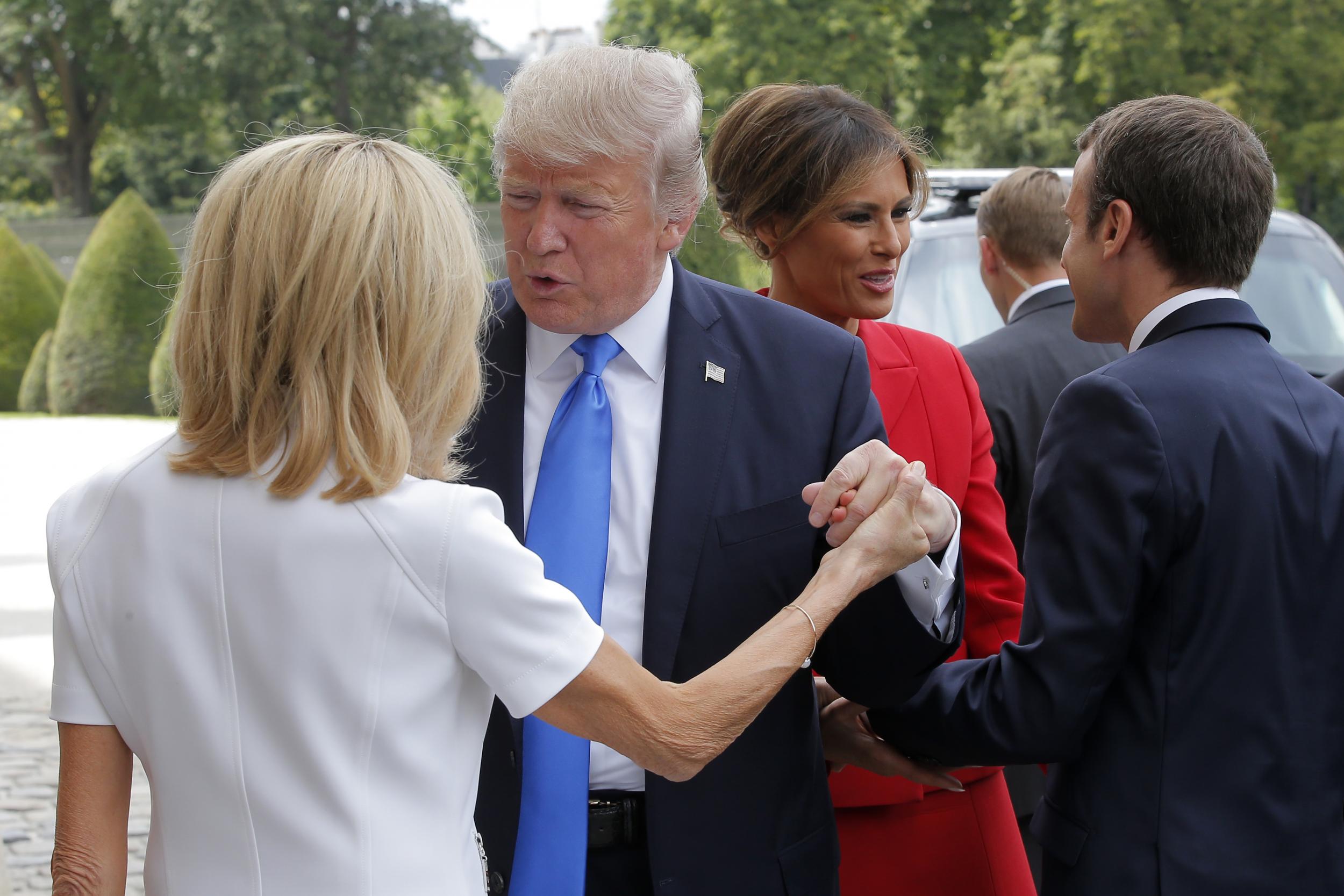 President Donald Trump told France’s First Lady Bridgette Macron that she looks beautiful and appears to be in very good shape. These comments were made during a tour of Les Invalides museum, as Trump was accompanied by his wife First Lady Melania Trump. During his visit to France, the President and his wife were the guests of honor and a lot of close contact was seen between both Donald Trump and Emmanuel Macron.

The tour was live streamed via Macron’s Facebook page by Government Authorities. President Trump compliments to Bridgette came while the streaming was ongoing so those comments were heard live on Facebook. The hour long video also showed the arrival of the President and his team as officers on horses lined both sides of the street leading to the President of France. He and wife Bridgette is seen standing and waiting in anticipation for the President’s arrival.

The trip to France lasted 2 days and involved talks between the 2 Government Heads. The tour itself came after the formal welcoming ceremony. After the tour the 2 met at France’s Presidential residence, Élysée Palace for bilateral talks. Trump said that he and Macron talked trade and military during his visit.

Bridgette Macron is 24 years older than her husband Emmanuel Macron. The First Lady is 64 years old, her husband is 40 years old. The age gap between the pair is the same for Mr. and Mrs. Trump. Melania is 47 years old while Trump is 71 years old.

This isn’t the first time Trump has been so open towards women. The President interrupted an Oval Office phone call with Ireland’s new Prime Minister to flirt with a female reporter. “Come here, come here. Where are you from? We have all of this beautiful Irish press,” said Trump To Leo Varadkar, the Prime Minister of Ireland. During this time he invited journalist Caitriona Perry to come over to his desk. “She has a nice smile on her face so I bet she treats you well,” said Trump to Varadkar.

Trump has drawn much criticism for tweets about various women. This included a more recent attack on Mika Brzenzinski, where he tweeted that she had been “bleeding badly from a face-lift.” He said this happened on New Year’s eve during a visit to his Mar-a-Lago estate in Florida.

“You’ve called women you don’t like fat pigs, dogs, slobs and disgusting animals,” Kelly said to Trump. She also said to him “You once told a contestant on ‘Celebrity Apprentice’ it would be a pretty picture to see her on her knees”. Does that sound to you like the temperament of a man we should elect as president?” she asked .

His reply to her was “I think the big problem this country has is being politically correct.”

previousDid Donald Trump Jr Commit Treason? White House Says No!
nextDonald Trump’s Approval Hits Record Low, How Low Can It Go?
We use cookies on our website to give you the most relevant experience by remembering your preferences and repeat visits. By clicking “Accept” or continued use of site, you consent to the use of all cookies. Privacy Policy
Do not sell my personal information.
Cookie SettingsAccept and Close
Manage consent