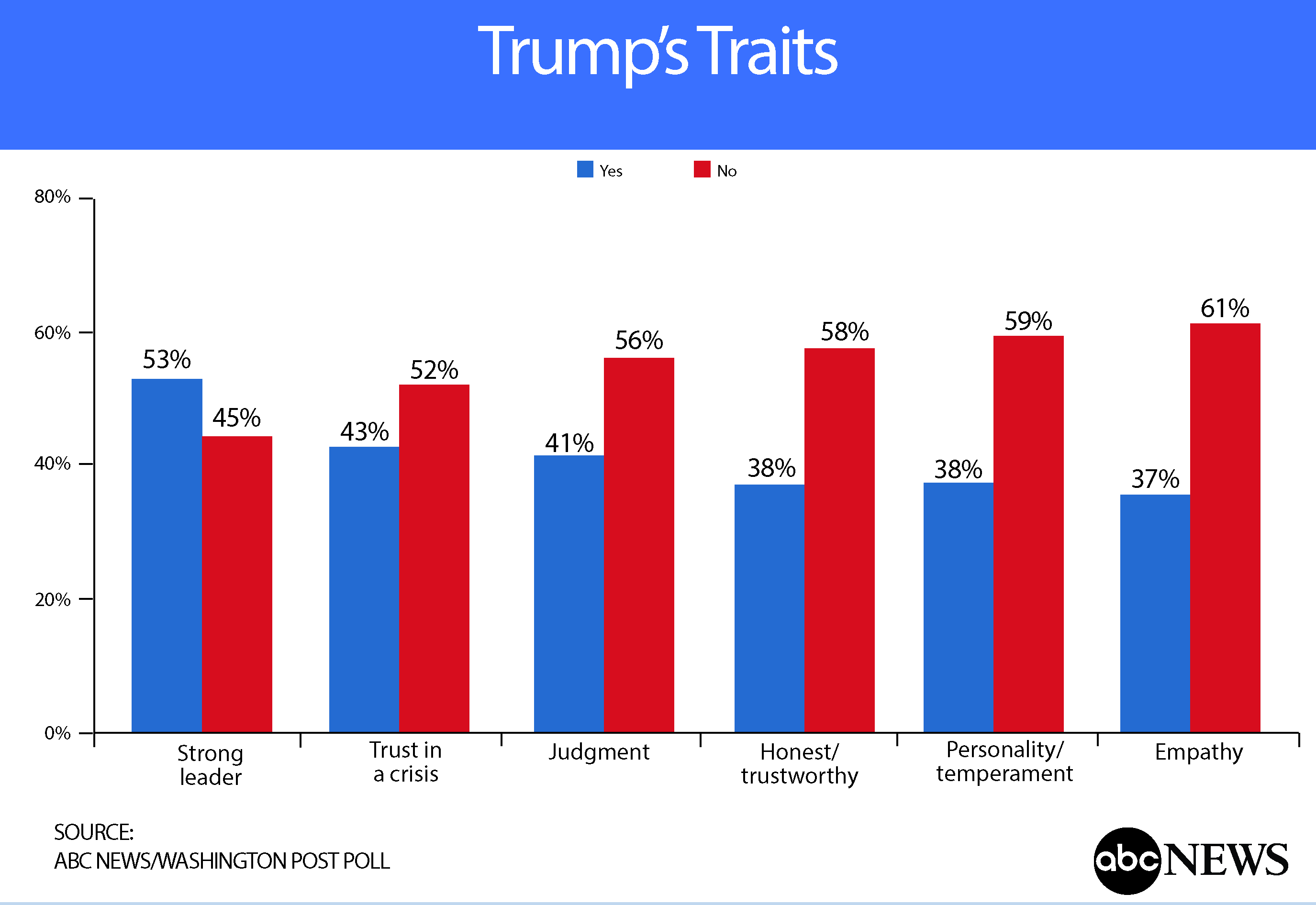 A new poll shows that President Donald Trumps ratings has dropped by a significant 36 percent and is the lowest of any President in office after the first 6 months in office. The President reacted to the ratings in a tweet saying “The ABC/Washington Post Poll, even though almost 40% is not bad at this time, was just about the most inaccurate poll around election time!”

According to a survey by ABC News/Washington Post which was released recently, Trump’s ratings of approval have dropped by 6 points since his 100 days in office. With a 58 percent disapproval of having him as Commander in Chief.

The suggestion by Trump regarding the poll before the 2016 election as inaccurate is wrong. This poll was conducted by the same ABC/Washington Post. That same poll showed Hilary Clinton leading Donald Trump by 4 points. Clinton 47 percent and Trump 43 percent. The Electoral College is what made Trump victorious in the election while Clinton won the popular vote. The popular vote was won by over 2.9 Million votes (65,853,625 to 62,985,106).

The 2.5 percentage points margin of error wasn’t far off as the results showed a margin of 2.1 percent. The ABC/Washington Post poll 2.5 percent was inline with many of the other National polls that came out just before election time.

Several reasons for the drop in approval comes from his agenda not progressing, when it comes to health care and his temperament. His temperament especially on a Global atmosphere and also the issues that relates to Russia during his campaign. The recent investigations into his son’s meeting with a Kremlin affiliated lawyer hasn’t helped. So Trump’s agenda doesn’t seem to be going anywhere and it is creating a stir.

Based on the survey ” just 38 percent of respondents say Trump is making “significant progress” toward his goals; 55 percent say he is not.” 2 out of every 3 Americans say they do not trust Trump to represent America when it comes to World leaders. That definitely includes Russian President Vladimir Putin.

27 percent believe U.S leadership has strengthened under Trump while 48 percent think it has gotten weaker. The poll took place from July 10 to July 13 during revelations of Trump Jr.’s meeting with Russian lawyer Natalia Veselnitskaya. This news didn’t help the Trump Administration which is already under much fire for how it has handled many of the Countries affairs.

While in Paris at a press conference Trump said that “most people would have taken the meeting.” The poll however showed that at least 63 percent of those who responded disagree with him. If this poll is anything to go by, it seems unless the President takes a step back and rethink his approach, this decline in approval will continue to rise.

The poll shows that the majority of Americans are becoming fed up with the type of behavior coming from the Commander in Chief. Anyone who holds such a position represents the entire Country. Therefore his behavior will be a reflection of that society and that isn’t what hurts the most. Surveys have long been used in American politics and represent the feelings of most people in the society.

previousFrench President’s Wife Complimented On Her Great Shape By Donald Trump
nextDonald Trump Accuses 20 States Of Voter Fraud, Does He Have The Facts To Back It Up?
We use cookies on our website to give you the most relevant experience by remembering your preferences and repeat visits. By clicking “Accept” or continued use of site, you consent to the use of all cookies. Privacy Policy
Do not sell my personal information.
Cookie SettingsAccept and Close
Manage consent