Does Donald Trump Have A Personal Vendetta Against Barack Obama? 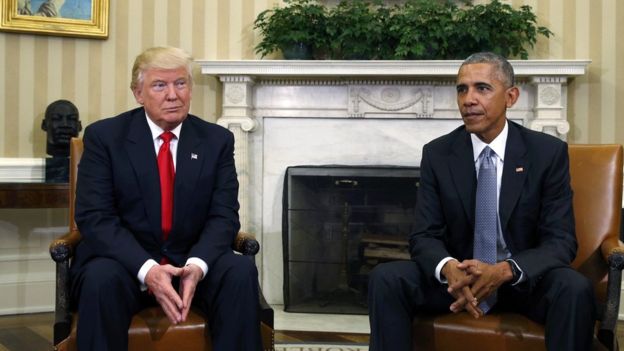 Barack Obama has been receiving much criticism from Trump for a long time. He has used twitter, the campaign trail and other avenues to try to belittle the former President.

This may all seem controversial but the facts speak for themselves. His rants about Obama have been ongoing for a while now.

If this all seems blown out of proportion, here are some facts to consider.

Trump criticized Obama 5 times of taking too many vacations. Trump himself recently took 17 days off while the White House was being renovated.

Obama was criticized about doing nothing with Russian interference in the 2016 election. The President denied he knew anything about any interference, but he knew.

Many of the legislatures that Obama put into law have been removed by Trump. Most recently is the ability for Law Enforcement to use military gear.

The aftermath of Hurricane Harvey saw Obama in Texas feeding those in need. During that time Trump didn’t make his move to Texas until sometime after.

Trump was bold enough to tweet this about the former President. He tweeted “President Obama will go down as perhaps the worst president in the history of the United States.”

Considering how far the current President has fallen in the polls, could this be true?

President Trump blasted Obama during his campaign run. The legitimacy of Obama’s Presidency was even brought into question.

Obama has been criticized for golfing instead of dealing with the Country’s issues. Trump has already spent 17 days away from office hitting the green.

As mentioned before vacations were a big thing with Trump before being elected. He considered it a waste of taxpayers’ money.

On the 14th day of his vacation, Trump was in Florida for a mini vacation. Taxpayers recently funded a business trip for his son Eric. The Secret Service was present at that trip.

Obama nominated Merrick Garland and it was a problem for Trump.

Trump nominates Neil Gorsuch and does the very thing he accused Obama of dong.

In 2012 Trump tweeted that “Obama is a disaster at foreign policy.”  Now the very policies he criticized he embraces.

In the same year he also tweeted about Obama and his authority.

His tweet read “Why is @BarackObama constantly issuing executive orders that are major power grabs of authority?”

It just looks as though Trump really had it out for Obama then and even now. What could be the igniting factor in this whole scenario?

What is it about Obama that gets Trump so broiled up?

previousJoe Scarborough Of MSNBC Tells Democrats They Need To Be United
nextTensions Could Be Brewing Between Donald Trump And John Kelly
We use cookies on our website to give you the most relevant experience by remembering your preferences and repeat visits. By clicking “Accept” or continued use of site, you consent to the use of all cookies. Privacy Policy
Do not sell my personal information.
Cookie SettingsAccept and Close
Manage consent