Democrats Say Deal Was Made, Trump Says No Deal 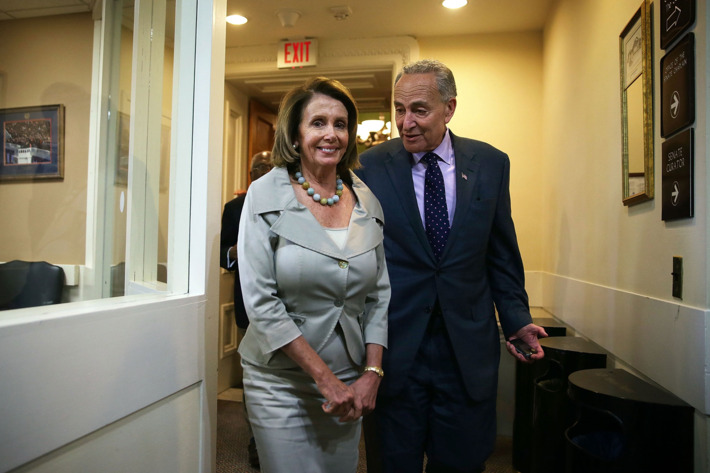 This one seems like a political nightmare. Democrats Nancy Pelosi and Chuck Schumer claimed Trump agreed to a deal. Trump said later that there is no deal.

Pelosi and Schumer had dinner with Trump recently. The issue surrounding DACA was discussed among others.

This seems like a serious game of “who lie?” On one hand Democrats say deal was made. On the other hand Trump Administration says no deal was made.

Who do we believe in a case like this? This type of mockery isn’t good for the Dreamers. The very persons who are trying to keep them in the US credibility is on the line.

This whole thing has left me with 2 possible scenarios.

Trump agreed to the deal and all was well. Those at the dinner talked and were able to come to a good agreement.

After the meeting, Trump discussed what he agreed to and was advised against it. So after the Democrats made their statement. Trump did as well.

Leaving Pelosi and Schumer feeling betrayed. Since they can’t understand how Trump could change his mind so easily.

This led Pelosi to tweet her grievances. She wrote “Trump’s cowardice is on full display today. His cruelty must not stand! #ProtectDREAMERS.”

The meal was called productive, but just how productive is to be seen. The meeting apparently created more mayhem than anything else.

Trump never agreed to anything. The 2 Democrats took it upon themselves to trick Trump. Both had a plan even before coming to the meeting.

They talked with Trump about DACA and the border wall. They then used the same topics to make a false statement to put Trump on the spot.

Trump realizing what had happened, immediately issued his statement.

Sarah Huckabee came out and gave a statement. She said Trump was “committed to the wall. It doesn’t have to be tied to DACA, but it’s important and he will get it done.”

Matt House tweeted “the President made clear he would continue pushing the wall, just not as part of this agreement.”

The reality is very different to my 2 scenarios. These are just my thoughts on what could have transpired.

Only those in the meeting knew what was actually said.

It just goes to show, you can’t believe everything the Politicians say. They will discuss many things behind closed doors.

We will hear what they want us to hear, the rest will be kept silent.

It is just sad to see leading officials and leaders play with the public this way. People’s livelihoods are at stake with the removal of DACA.

More so, the wall seemed to be a very big topic. The 2 are tied in some way, since the wall is to keep out immigrants.

DACA is to help some of those very immigrants who may have crossed the wall.

previousCelebrities Turn Politicians For A Day During Fundraising Event
nextWhat Does Resolution Hold For Those Oppose To Equality?
We use cookies on our website to give you the most relevant experience by remembering your preferences and repeat visits. By clicking “Accept” or continued use of site, you consent to the use of all cookies. Privacy Policy
Do not sell my personal information.
Cookie SettingsAccept and Close
Manage consent