Why Did The Charlottesville Meeting Turn Ugly? 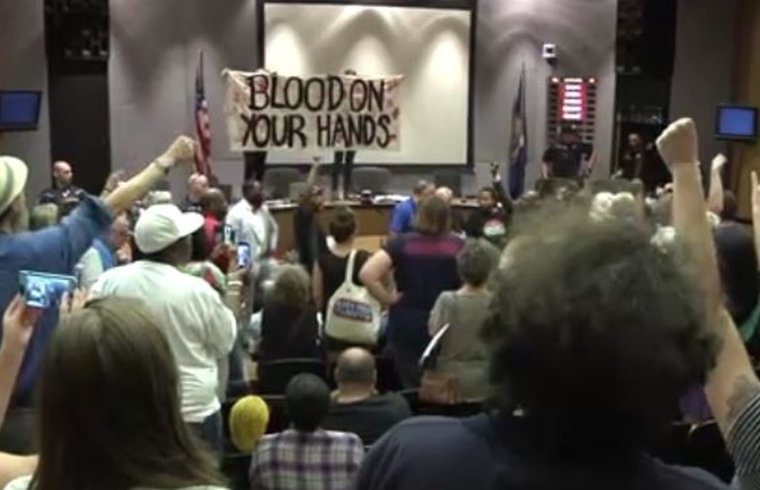 A meeting between residents and Charlottesville council members turned ugly. The meeting took place after what happened during a rally in Charlottesville.

The rally turned violent with one person losing their life. A young man drove a car into a group of protesters. Others received injuries as a result.

White supremacists and Antifa confronted each other. The rally was a protest about the removal of Confederate statues.

One group wanted the statues to stay, the other to have them removed. This was the cause of many of the protests.

The meeting started rather peacefully, but quickly grew contentious. Mentioning the rally is what caused the uproar among residents.

Two persons held a banner which read “blood on your hands”. This was done as the officials left the room.

Residents spoke for over four hours. During that time they criticized the officials for how they handled the rally.

The meeting was so heated that the police had to intervene. Three persons were eventually arrested and charged for disorderly conduct.

This only increased tensions and made matters worse. The large crowd then shouted “shame” and “turn it down”.

Tracy Saxton was one of the people who vented their frustration. She said “I watched my people get beat and murdered.”

The residents also demanded the release of those arrested at the meeting.

Vice Mayor Wes Bellamy was able to quiet down the crowd. She promised everyone an opportunity to speak.

That is when the residents started their criticism. They said that the rally should have never happened.

The mayor said he had no choice about the rally. He said a federal judge ruled in favor of the rally. Signer said the council objected to no avail.

He said “a Federal Judge forced us to have that rally downtown.” “We tried really hard,” he said.

The mayor was asked to resign by the residents. He got the most ridicule from those present.

“I’m not the same person I was that day,” said Paul Hurdle. She trembled as she talked about what happened at the meeting.

Maurice Jones, the City Manager told residents to make any complaints they have to the Police Chief. Complaints related to specific, serious incidents surrounding any concerns they have.

previousHow The Awan Brothers Got Away With $120K From Democrats
nextDid Chuck Todd Show Favoritism Or Fear To Antifa?
We use cookies on our website to give you the most relevant experience by remembering your preferences and repeat visits. By clicking “Accept” or continued use of site, you consent to the use of all cookies. Privacy Policy
Do not sell my personal information.
Cookie SettingsAccept and Close
Manage consent