Trump’s Comments At Dinner Sparks Speculation: What Does He Mean? 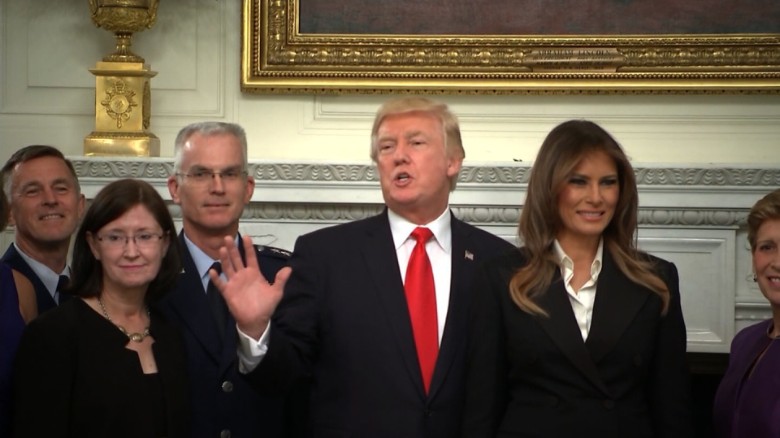 The President recently held a dinner at the White House. The dinner was attended by many Senior Military leaders.

During the dinner Trump spoke to those present including reporters. He asked “you guys know what this represents?”

The question and response got the attention of reporters. One reporter asked “what storm, Mr. President? ISIS? North Korea? Iran?”

The President replied “you’ll find out.”

The comments have created quite a stir. It has many people wondering what the President is talking about.

What does all of this mean? Speculation is very high. This comes at a time when tensions are high with North Korea.

Trump has made many threats of a nonsense stand against that regime. The dinner comprised of many Military personnel which increased speculation.

It seems as though Trump could be playing with the Press. There is also a possibility of getting a Military backing on his plans. The President words could generate so many scenarios.

There will be lots of speculation for sure, but waiting on Trump is the best thing. He knows what he is talking about.

It is also possible that those attending the dinner do as well. They may have received some sort of briefing at the dinner.

As those present gathered together for a photo, Trump made this remark.  He said “we have the world’s great military people in this room, I will tell you that.”

Trump had spoken earlier in the evening. He praised the Defense Secretary and Chairman of Joint Chief Of Staff.

He said that the purpose was to discuss any military issues bothering the Country. Trump believes progress has been made regarding the Islamic State Group.

He said “I guess the media’s going to be finding out about that over the next short period of time.”

The President’s focus was on nuclear activity by Iran and North Korea.

It seems that speculation could possibly be narrowed down a bit. The President made many remarks regarding nuclear activity by these two Countries.

He believed that after their meeting things should improve in regards to such threats. He said that there should be “a broad range of military options, when needed, at a much faster pace.”

His stance on North Korea hasn’t changed at all. Trump wants the North Korean leader to settle down.

He said “we cannot allow this dictatorship to threaten our nation or allies with unimaginable loss of life.” Trump said he would “do what we must do to prevent that from happening and it will be done, if necessary. Believe me.”

This might be the reason some speculate the comments are about Kim Jong-un. It is possible that he is looking at some sort of retaliation measure.

But as the President said “you’ll find out.”

previousCould Hillary Clinton Be Using Gun Control To Gain Momentum?
nextCould The Feud Between President Trump And Rex Tillerson Be True?
We use cookies on our website to give you the most relevant experience by remembering your preferences and repeat visits. By clicking “Accept” or continued use of site, you consent to the use of all cookies. Privacy Policy
Do not sell my personal information.
Cookie SettingsAccept and Close
Manage consent