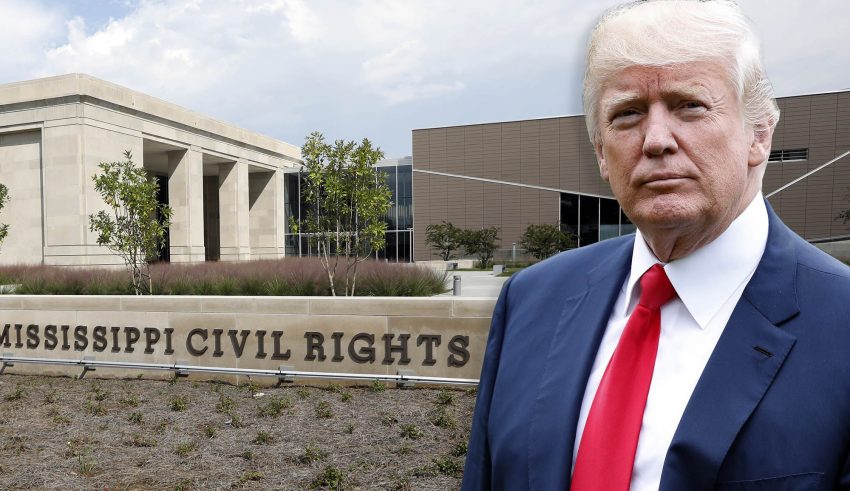 Trump attended the museum in Mississippi that honored the civil rights movement. He gave a speech where he acknowledged those who helped to build the U.S.

Part of the ceremony showed an exhibit about “Freedom Riders.” Trump spent about 30 minutes there of which he spoke for 10 minutes.

The demonstration was peaceful and Trump stayed clear of controversial subjects. Demonstrators held placards that read “Make America Civil Again” and “Lock Him Up.”

Some demonstrators were more vocal, shouting “No Trump, no hate, no KKK in the USA.”

The day was cold and saw Trump heading to his property in Florida, bypassing the dedication ceremony held outside.

“The civil rights museum records the oppression, cruelty and injustice inflicted on the African-American community, the fight to bring down Jim Crow and end segregation, to gain the right to vote and to achieve the sacred birthright of equality. And it’s big stuff. That’s big stuff,” Trump said.

“Those are very big phrases, very big words. Here we memorialize the brave men and women who struggled to sacrifice and sacrifice so much so that others might live in freedom,” he continued.

Despite the seemingly low keyed event some kept their distance. They cited Trump’s personality as one hard to trust.

Both men thought Trump didn’t appreciate the civil rights movement neither its values.

“We will never cede the stage to an individual who will fight against us,” Johnson said. “We will not allow the history of those who sacrificed to be tarnished for political expediency.”

The State’s Attorney General, Jim Hood said “it threw cold water in the face of people who fought the battles for civil rights.” He disapproved of Gov. Phil Bryant invitation to speak at the event.

Bryan talked about “the emotion that comes over you in waves as you see the past, the struggle, the conflict. I’m so very proud today that the President of the United States was here to see and witness it.”

“Today we strive to be worthy of their sacrifice. We pray for inspiration from their example. We want our country to be a place where every child from every background can grow up free from fear, innocent of hatred and surrounded by love, opportunity and hope. Today we pay solemn tribute to our heroes of the past and dedicate ourselves to building a future of freedom, equality, justice and peace,” Trump said.