March 04, 2021
Home News Mixed Emotions As Hillary Clinton Did Cameo At The Grammy Awards About Fire And Fury Book 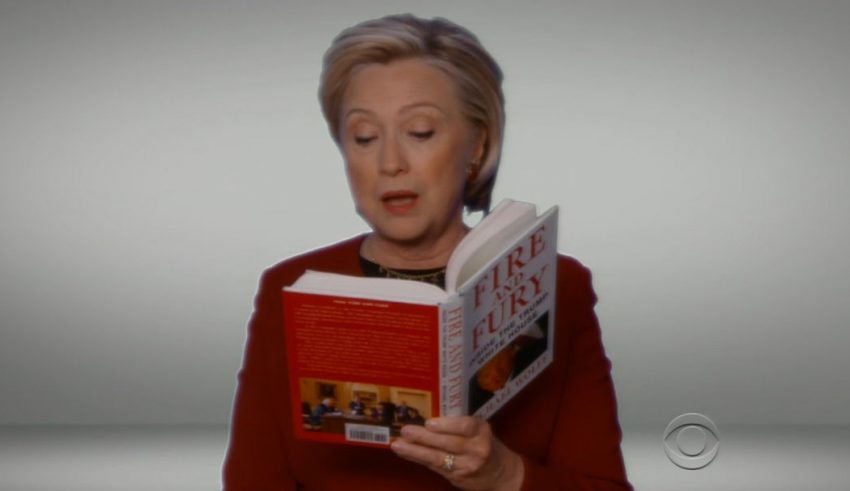 The new book by Steve Bannon had created a wave of controversy in the political sphere. It had raised many questions about President Trump’s integrity including his sanity.

Now in a new twist the book surfaced on the Grammy Awards show as Hillary Clinton did a cameo.

Many received the skit with laughter and applause while others were disturbed that politics was mixed with the music awards.

It seemed however that those who disagreed with the tactics would have to endure this for a while. The Grammys wasn’t the first place for this to happen and certainly wasn’t expected to be the last.

Politics had a way of creeping into the lives of individuals and this seemed the way for many persons to vent their frustrations.

Clinton didn’t appear on the show in person but rather did a pre-taped segment.

“We know that our current President does love winning awards and the good news he may just be the subject of next year’s winner [for Best Spoken Word Album],” host James Corden said. “The question I’ve got is who’ll be the narrator?”

Another pre-taped video showed Cher and John Legend auditioning or the narrator part. Snoop Dogg, DJ Khaled and Cardi B also did faked auditions using portions of the book.

During her skit Clinton read from the “Fire and Fury” book and Corden said “That’s it! We’ve got it!”

Clinton said, “You think so? The Grammy’s in the bag?” Corden replied, “In the bag!”

Nicky Haley and Donald Trump Jr. both condemned the skit.

Haley tweeted “I have always loved the Grammys but to have artists read the Fire and Fury book killed it. Don’t ruin great music with trash. Some of us love music without the politics thrown in it.”

She replied to Anne Rumsey Gearan tweet which read “Hillary Clinton doing a dramatic reading of “Fire and Fury” was worth waiting up for.”

Haley responded with a tweet of her own which said “I disagree. That part ruined the Grammys. Such a shame.”

“Getting to read a #fakenews book excerpt at the Grammys seems like a great consolation prize for losing the presidency. #GrammyAwards,” tweeted Donald Trump Jr.

It was clear to see that what happened at the Grammys wasn’t taken nicely by some, but who could blame them.

It was unlikely this would be the last we hear of this, a comment from the President was yet to be seen.