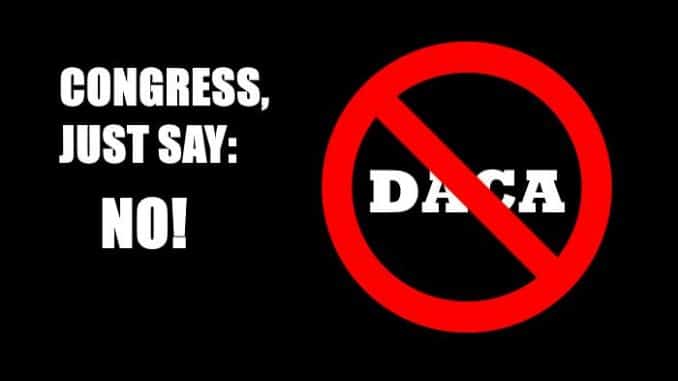 The immigration bill drafted by Chuck Schumer and Mitch McConnell failed to get the needed votes. This was a bill that Trump signed off to be voted in Congress.

There were warning from Republicans and Democrats alike about not voting for the bill. It was likely that those threats were kept leaving the Dreamers without a deal and Trump without a wall.

Trump wanted his wall and was willing to compromise on immigration to get it, but others felt differently.

The White House blamed Schumer and his colleagues for the failure of the bill. Trump also tweeted about the failure as if he didn’t want it.

She added “they filibustered a proposal with an extremely generous path to citizenship because it also contained reforms that secured our border and secured our immigration system.”

The failure of the bill left more questions than answers for lawmakers who don’t seem to have a solution.

“While radical Schumer Democrats align themselves with the open border fringe, the Trump Administration will continue advocating for the American people. The next step will be for the House to continue advancing the proposal from Chairman Goodlatte and Chairman McCaul,” the White House said.

The Government protecting its citizens was an honorable duty. But what was ironic about the situation was the fact that America was made up of descendants of immigrants.

The White House made it clear the most important thing to them was the American people. History taught that the Nation of America had its roots in immigration.

Immigrants of the past are responsible for what America was today; wouldn’t a continuation of this be beneficial?

“The Schumer-Rounds-Collins immigration bill would be a total catastrophe. @DHSgov says it would be ‘the end of immigration enforcement in America,'” Trump tweeted. Yet the President signed off on the deal.

The Dreamers saw the hopes dashed as no deal in their favor was forthcoming. The question was could there be more to this than just protecting the American people?

Wasn’t it apparent that these 1.8 million persons were already living in America for a while now?

What could they have done that required their immediate departure that was affecting America as a Nation?

It was questionable if there wasn’t a more discriminatory reason for the desire to have DACA abandoned and Dreamers leave America.