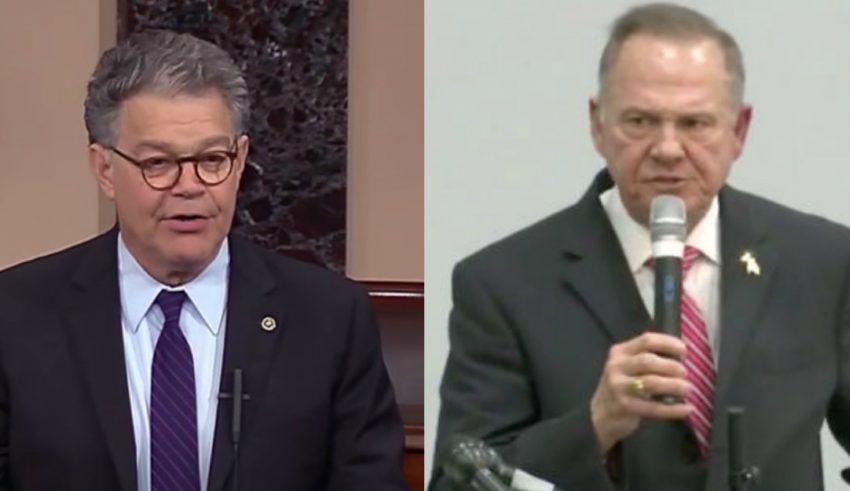 Both Roy Moore and Al Franken have faced allegations about sexual misconduct. But both have been received in a different light by the President.

Trump didn’t say too much about Moore, but was more vocal towards Franken. He had been accused of selective outrage. Trump had also faced allegations during his Presidential bid.

“Where do his hands go in pictures 2, 3, 4, 5 & 6 while she sleeps?” Trump tweeted. “And to think that just last week he was lecturing anyone who would listen about sexual harassment and respect for women.”

Leeann Tweeden had accused Franken of sexual assault. She said the incident made her “so angry, I was in disbelief.”

“To this day I talk about it and my hand clenches into a fist,” Tweeden said.

She said he “puts his hand on the back of my neck and comes in so fast. There was not finesse to it at all — let’s put it that way. And he just mashes his mouth to my lips. It was wet and he puts his tongue in my mouth and I push his chest away with my hands.”

She was describing a kiss he gave her, the kiss was a rehearsal that she reluctantly did.

Moore’s former cases came into focus as many continued to ask him to step aside. It was said that during his judicial years he sided with defendants.

Matt Lembke said “he consistently was more interested in the arguments of the criminal defendants than many of his colleagues. “And I think that stemmed from a distrust of government power reflected in his judicial philosophy.” Lembke had faced Moore in many cases throughout his career.

Matthew Clark wrote “he had no love for criminals, but he believed that every defendant was entitled to due process of law.”

“He saw many cases where the defendants, especially young black men, would be convicted solely on very weak circumstantial evidence,” Clark continued.

During his campaign against Senator Luther Strange an ad had been running against Moore. The ad was about a vote he made in favor of someone who molested a child.

His reasoning was “sodomy is an abhorrent crime and should be strictly punished” but that “I am concerned the court is stepping into the shoes of the legislature in this case.”

Since Moore refused to step aside efforts are underway to see that he loses the election.

Those into gambling believed that Moore will lose to his opponent. The matter will soon reach its decision as the date quickly approaches.