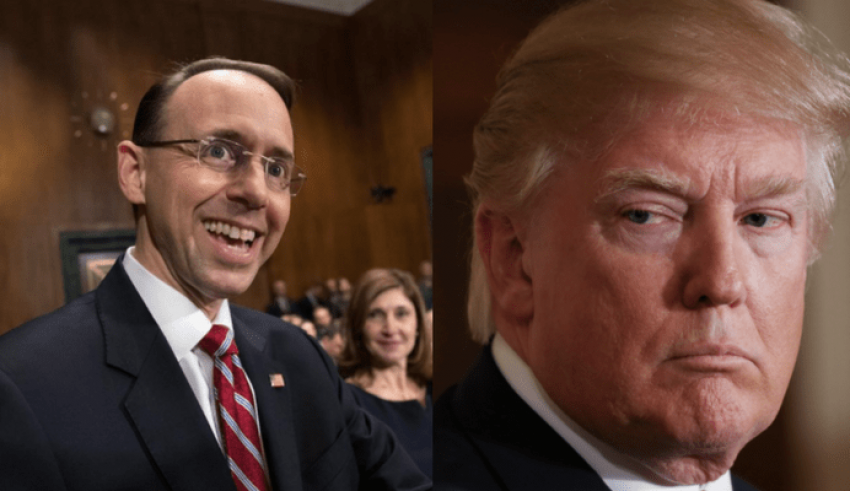 It was reported that any attempt by Rod Rosenstein to protect Robert Mueller could be hurtful. The report claimed that the Justice Department could suffer.

More concerning was the thought that Trump could fire Mueller as he called the appointment illegal.

Rumors speculated that Trump had wanted to fire the Special Counsel for a long time.

Trump had been at odds with most of his Justice Department for a while now. He had feuds with the FBI and even some of his Party colleagues.

Now America watched to see what Trump will do in these circumstances.

Trump had tweeted “James Comey illegally leaked classified documents to the press in order to generate a Special Council (sic)? Therefore, the Special Council was established based on an illegal act? Really, does everybody know what that means?”

Was what Trump really true or was he grasping at straws?

“James Comey illegally leaked classified documents to the press in order to generate a Special Council? Therefore, the Special Council was established based on an illegal act? Really, does everybody know what that means?”

The big question that lingered was if Mueller’s appointment was illegal, how come he hasn’t fired him yet?

The Justice Dept. was dealing with many issues and feared the system could be hindered.

“The department is responding to what it believes to be good faith requests for information pursuant to Congress’s appropriate oversight function, and the department is doing so in a way that will not have any adverse impact on ongoing investigations,” said Stephen E. Boyd.

It was believed that Rosenstein’s stance to protect Mueller could harm the department.

“It could become an exception that swallows the rule,” said Sen. Richard Blumenthal. “Every request by Congress can be made to seem exceptional.”

It was also believed that Trump threw Rosenstein under the bus.

“Rod got suckered by the President in writing the memo,” said Philip B. Heymann. “Trump marched his deputy attorney general way out on a limb and then left him there.”

Heymann, a former Justice Department official and one of Mr. Rosenstein’s mentors felt Rosenstein got a bad deal.

The deputy AG also had those who supported him.

“I never heard a political word escape from his lips,” said Brian E. Frosh. “He was smart, honest, fair, tough — everything you want in a prosecutor.”