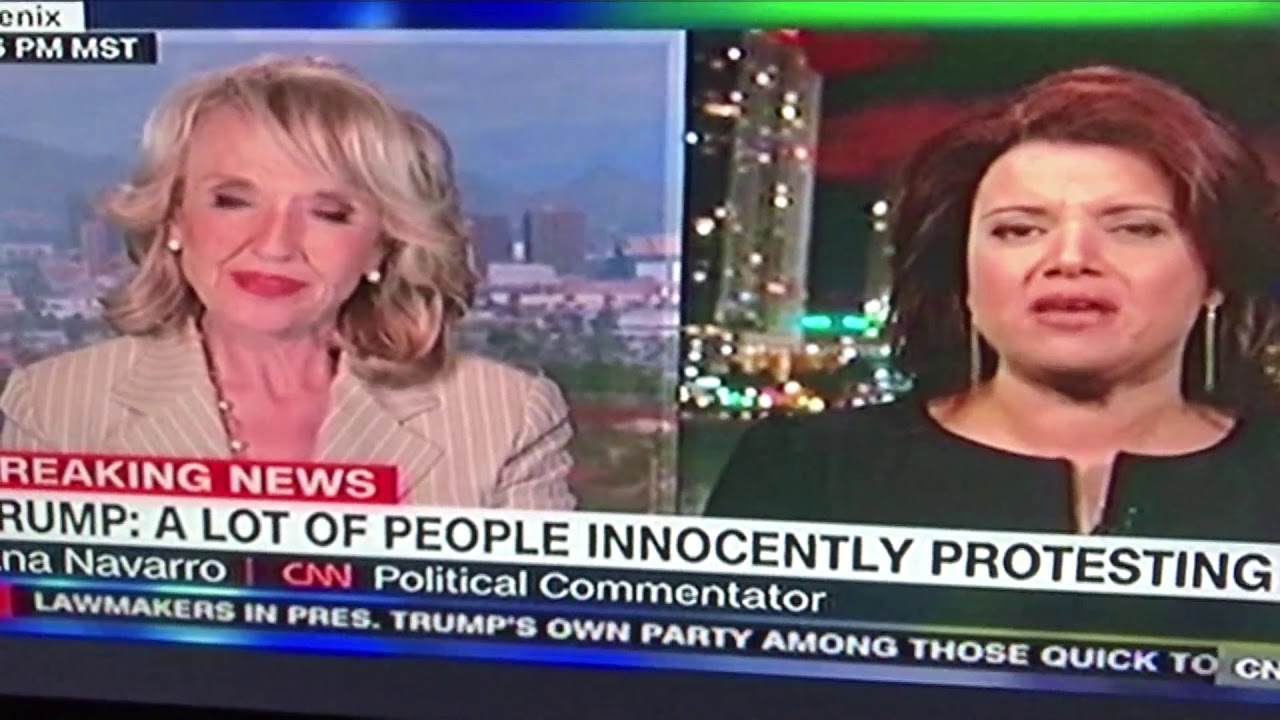 President Trump comments about Charlottesville violence have created a stir. After his initial statement, he denounced the actions of white supremacists.

Ana Navarro a CNN host attacked statements made by Trump. Navarro who is originally from Nicaragua has been very outspoken about Trump.

She is considered to be totally opposed to Trump. Since Trump took office her popularity has risen. This is due to her constant lashing out of the President.

CNN has been called very anti-Trump. It is believed that Navarro has allowed herself to be used as their mouth piece.

She has been dubbed the “Republican Latina Trump hater.”

Jan Brewer defended Trump in an interview with Navarro and Don Lemon. Brewer said she wasn’t ashamed of Trump’s remarks.

She said “I think that he took the bull by the horns. He spoke from his heart. And you know, this relentless reporting and this relentless attacking of him, is not serving our country or the issues that we talk about well.”

She continued, “And it’s getting a little over burdensome. I’m feeling that the people of America, the people of the United States particularly have about had it. You know.”

Her conversation with Lemon took a turn. Whenever she tried to make a comment she was interrupted. This caused Brewer at times to forget the point she was making.

Navarro made fun of Brewer because of that. She said “I’m able to keep my train of thought.”

Her mocking of the former Governor was considered ugly by some. Navarro made rude gestures as Brewer tried to make her comments.

Trump hating continues to be the method of choice for CNN and its hosts. What has caused the Liberals much headache is Trump’s ability to remain so popular.

Lemon asked how both parties involved could be equal. Brewer responded that Trump denounced the KKK and neo-Nazis.

Are the liberals overreacting? Is Brewer talking facts? Both parties have different views on the topic.

On one hand the constant lashing out at Trump keeps him in the news. On the other hand some are disgusted with his behavior.

Brewer has made it clear that she denounces the actions in Charlottesville. She said at 72 years she has seen a lot.

She thinks that it all needs to stop and the Country needs to unite.

Brewer is right about unity, the Country definitely needs it. Clashes have continued to disrupt lives. Some people have lost their lives at times.

Many who can do better have hidden themselves from the problem. There is a big issue and it needs to be solved.

The problem is one of the heart. For there to be any peace and reconciliation, the way of thinking must change.

previousIs Kid Rock Running For Senate In Michigan Too Far Fetch?
nextIs Don Lemon On To Something About Racism In The White House?
We use cookies on our website to give you the most relevant experience by remembering your preferences and repeat visits. By clicking “Accept” or continued use of site, you consent to the use of all cookies. Privacy Policy
Do not sell my personal information.
Cookie SettingsAccept and Close
Manage consent