November 27, 2020
Home News President Trump’s State Of The Union Address Leave Many With A Sour Taste 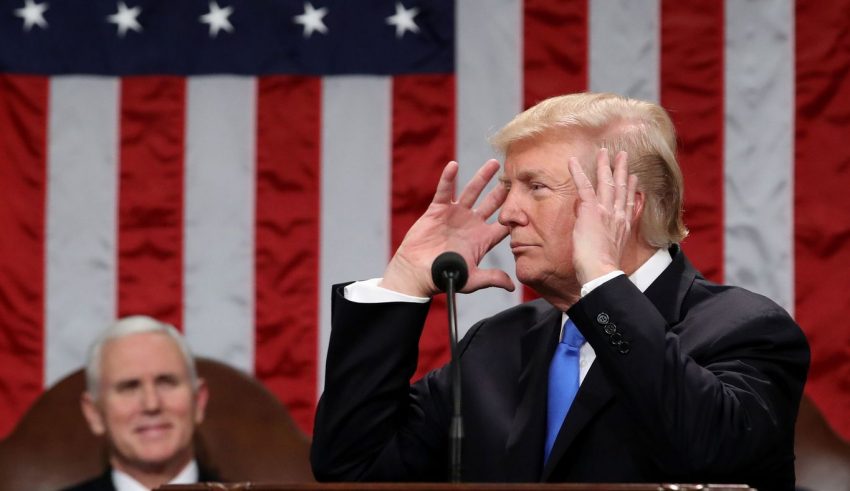 The President of America gave his first State Of The Union speech and he didn’t disappoint. Trump continued his usual nonfactual bragging.

He made many claims in his speech which were found to be untrue and others with partial truth. As expected Trump bragged about what he considered his many accomplishments since becoming President.

He also talked about measures he would like to see implemented and promised that “the time for trivial fights is behind us.”

This led to a large applause but many were in doubt if this will actually happen. Nowhere in his speech did the Russian inquiry come up.

“Weakness is the surest path to conflict, and unmatched power is the surest means of our defense.” He said of dealing with the Islamic State: “Past experience has taught us that complacency and concessions only invite aggression and provocation.”

Calling for unity Trump issued a call to all to put differences aside.

“Tonight, I call upon all of us to set aside our differences, to seek out common ground, and to summon the unity we need to deliver for . . . the people we were elected to serve,” he said.

“Americans love their Country, and they deserve a Government that shows them the same love and loyalty in return,” he said. “For the last year, we have sought to restore the bonds of trust between our citizens and their Government.”

“The American people do not want a President who is compulsively dishonest, who is a bully, who actively represents the interests of the billionaire class, who is anti-science, and who is trying to divide us up based on the color of our skin, our nation of origin, our religion, our gender, or our sexual orientation,” Bernie Sanders said.

“What Trump also forgot to tell you is that while the Walton family of Walmart, the wealthiest family in America, and Jeff Bezos of Amazon, the wealthiest person in this country, have never had it so good, many thousands of their employees are forced onto Medicaid, food stamps, and public housing because of the obscenely low wages they are paid,” he said.

Kennedy had much to say about what Trump had done so far.

Trump’s record was “a rebuke of our highest American ideal: the belief that we are all worthy, we are all equal and we all count — in the eyes of our law and our leaders, our God and our Government,” he said